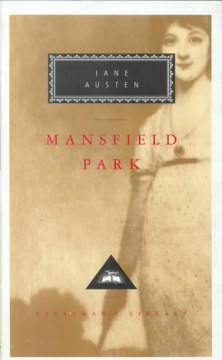 A more reserved heroine, but with plenty of plot twists

I liked Mansfield Park, despite its length. I saw it as something of an extrovert's guide to an introvert's world. I don't think Fanny was portrayed as too flawless; her emotions were all over the place, just as many other people's would be. I might have found her too good to be real if her emotions and thoughts hadn't been the main lens through which the reader sees the story, but that would be another story, as they say. Having acted in seven plays, I think the theatrical segment of the story is very well done, although with all the emotional tension involved in that subplot (some of which I can relate to), it was rather stressful to read. This book is somewhat bleaker and less satisfying than, say, Pride and Prejudice, but I don't think that's necessarily a bad thing or a departure from Austen's intentions - although without a guiding hand such as hers, I highly doubt that the central couple could have survived such a quantity of turbulent events and deceptive interlopers!

I can believe my girl Jane followed the masterpiece Pride and Prejudice with Mansfield Park.

I love this book. Many reviewers describe Fanny as prissy or boring but I see her as having humility rather than weakness and integrity rather than being boring. She is only 18 and has yet to receive genuine love sufficient to enable her to blossom in confidence. Whilst she will always be gentle and considerate she will lose her shyness and insecurity once truly loved by one she can love and cherish in return. Just some real TLC is what she needs to turn the ugly duckling into the swan she really is.

It was written at the beginning of the 1800s which was a time of incredible change. Holding to time honoured principles and not throwing out the good for a new not so good was Austen's perspective.

Whilst I did not agree with some of the judgement on others Fanny makes, at the core she does have the gift of discernment. The one flaw in the book was the final treatment of Maria (pronounced Mariah). She made a serious error which cost her a lot but then her family turned their backs on her. There was no room made for her to develop contrition and learn from what she had chosen to do. I wish Austen had ended the book otherwise but then again, it was probably in keeping with the times; a fallen woman was severely judged in those times. Otherwise, this is one of my favourite novels.

I thoroughly enjoyed reading "Mansfield Park" and at certain times would even characterize it as a "page-turner." It's a classic for a reason. That said, I am conflicted about the characters of Fanny and Edmond. Does Austen really want us to fully identify and sympathize with them? They're so uptight and prudish! Did Austen really want us to sympathize with their more modern and educated cousins? I'm so curious to know what others think.

Mansfield Park is a beautiful story and book. I absolutely loved it. It was kind of slow at first, but that doesn't last. Fanny is by far my favorite Jane Austen heroine. She is sweet and kind and quiet and polite. She never disappoints you. I absolutely adore her. And Edmund is perfect for her. Despite the fact that for a while he fancies himself deeply in love with a wicked woman, he too is wonderful. I just love this book so much! I cannot wait to find a good adaption of it!

I love most classical literature novels, by all the classical novelist; Jane Austen. Charlotte Bronte, Charles Dickens, and Victor Hugo to name a few. Mansfield Park did not disappoint me at all.

After about 20 years I thought it was time for a re-read of Austen's books. My opinions of this particular book haven't really changed. I still can't appreciate the characters of Fanny and Edmund. The moral overtones of the story and characters really annoys me.
And in the end I rather wish Fanny hadn't gotten the man she wanted because I really think she deserved better.

(Contain spoilers.) I firmly believe no librarian ever read Mansfield Park, otherwise Lord Bertram’s burning all the copies of Lover’s Vows he found would have banished it from libraries! (Chuckle!) This third book has all Miss Austin’s talented penmanship, but very little—or nothing, rather—of the comic situations I found in Pride and Prejudice and most especially in Emma. This is a deeper, more serious novel, highly moralizing, with lots of inner thoughts and questionings, which sometimes might get a bit long to the modern reader unused to this kind of literature. Through this book—as in all her others—she makes very clear what she expected (not only society), that “girls should be quiet and modest” and “perfectly feminine.” She condemned, on people in general, the “want of that higher species of self-command, that just consideration of others.” In the story 10 year-old Fanny Price, goes to live with her wealthy uncle and aunt, Lord and Lady Bertram, in their beautiful and tranquil estate of Mansfield Park. There she meets four cousins, two girls and two boys, of which, second son, the mature and highly honorable Edmund, becomes her ideal since the beginning. (Edmund was not a priest, but was ordained a couple of chapters before the end of the book.) The story evolves through ups and downs, lots of misunderstandings, to culminate in a happy ending. Unlike what is portrayed in movies inspired by Mansfield Park, Fanny is not treated unkindly, nor relegated to a dungeon-like room. Her sleeping quarters were a “little white attic” with connection to the old “school-room” which contained her plants, her books—of which she had been a collector from the first hour of her commanding a shilling—her writing desk, and her works of charity.” The lack of fire in that room was due to her Aunt Norris constant meddling and a shocked Lord Bertrand belatedly corrects this injurious situation. British society was then divided into classes and Fanny, while enjoying much of the benefits of living with the family, belonged to a very poor branch—hence the differed treatment she received. “If tenderness could be ever supposed wanting, good sense and good breeding supplied its place,” Jane Austen writes about the Bertrand family in relation to Fanny. Miss Austen’s high moral standards permeate the entire book, it is full of Fanny’s eagerness to do what is right and proper, to think good thoughts and do good deeds. Good and evil were clearly discerned and exposed in the situations Austen weaves; the elopement of a married woman with a bachelor is to her a “sin of the first magnitude.” I feel sure Jane Austen, whose heroines were invariably highly principled, moral young women, would have been devastated had she a chance to see the state of today’s youth, particularly of girls. I only wish young women would read more of this kind of literature instead of the filth available now in all American libraries.

This is the first Jane Austen book I read and I thoroughly enjoyed it. I plan on reading more of her books in the future.

Jane Austen almost at her finest and definitely at her most hilarious. It was hard keeping track of who was who among the Miss Bertrams and the Crawfords and the brothers, but even the characters acknowledged the difficulty. Austen’s final novel is actually a little racy, as men and women in tight laces talk politely until they’re blue in the face about how indecorous behaviour is the last thing anyone wants, all while participating in a full theatre production about adultery and wife-swapping. They even get the priest to join in! Conjugal infidelity is actually mentioned. By name! This novel is downright salacious.

And amongst the noisier than usual plot, there is a main character who is an introvert. As an introvert myself, Fanny is an island of calm in the storm of keeping track of who is canoodling who behind the ha-ha. Was Jane Austen an introvert too? She could hardly have done better.

As usual for Austen the prose is exquisite, so light and perfect, the characters making love to each other with their polite conversation. Austen is a master of seduction with all your clothes on. Although also as usual, everything gets wrapped up really quickly at the end and there’s no strong finish to the delightful journey.

I am mid read and am enjoying how the characters develop and the relationships change throughout the novel. It's a relaxing, well written and fun read.

It's a very, very tough call, but this is my favorite Jane Austen novel, and beating out Emma and Pride and Predjudice, and Northanger Abbey is no mean feat. I can not explain the fascination that I share with so many people with Austen's writing but share it we do, and next to Dickens she is my favorite novelist.

Fanny annoyed me at times just because she was so physically frail and doesn't always view herself highly, but she is otherwise sensible and does what's right.

I found it a little slow, but very well written.

I normally love Jane Austen novels, but I didn't like this one.
I thought it was really boring at times.

I've heard people call Fanny Price a cookie-cutter, undynamic, goody-two-shoes... and, in a sense, she is. I don't think she makes a single immoral or improper move throughout the entire novel. However, that's precisely what makes this book so interesting -- rather than resolving a situation by making a character undergo a personality change, Austen creates a character who refuses to budge for a millimetre from her moral values, and puts her in extremely difficult situations *without* changing her nature. It's an unconventional approach, and it kept me wondering how the plot would resolve. My favourite Austen.

The tone of Mansfield Park different from other Austen novels but I don't think that should be held against it.

Not one of Jane Austen's best. The book moves really slowly and is quite boring at times. Pride and Prejudice and Sense and Sensibility are much better.

Fun to read, your typical Jane Austen book. If you like Jane Austen, you'll love this book.
On a personal note, the storyline between Edmund and Fanny frustrated me greatly.