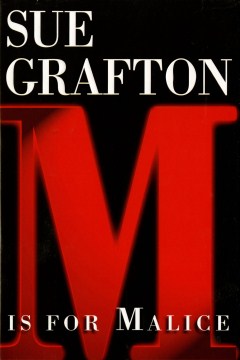 M Is for Malice

Baker & Taylor
At the behest of the Malek family, owners of a multi-million-dollar construction company, private detective Kinsey Millhone is hired to trace the missing prodigal brother of the troubled and embattled clan, eighteen years after he had vanished without a trace. 1,000,000 first printing.

"M" is for money. Lots of it. "M" is for Malek Construction, the $40 million company that grew out of modest soil to become one of the big three in California construction, one of the few still in family hands.

"M" is for the Malek family: four sons now nearing middle age who stand to inherit a fortune--four men with very different outlooks, temperaments, and needs, linked only by blood and money. Eighteen years ago, one of them--angry, troubled, and in trouble--went missing.

"M" is for Millhone, hired to trace that missing black sheep brother.

"M" is for memories, none of them happy. The bitter memories of an embattled family. This prodigal son will find no welcome at his family's table. "M" is for malice.

And in brutal consequence, "M" is for murder, the all-too-common outcome of familial hatreds.

Baker
& Taylor
At the request of the Malek family, owners of a multi-million-dollar construction company, private detective Kinsey Millhone is hired to trace the missing brother of the troubled and embattled clan, eighteen years after he had vanished without a trace

Kinsey Millhone locates a lost member of a family that will inherit millions, except, once found and returned to the family, he is found bludgeoned to death in his bed. Kinsey solves the crime. Formulaic Grafton.

BOTTOM-LINE:
Great novel, good characters, let-down for the ending.
.
PLOT OR PREMISE:
Kinsey is hired by her cousin Tasha, the lawyer, to track down the long-lost fourth son of a recently deceased construction company owner so they can file the will for probate.
.
WHAT I LIKED:
Kinsey does a quick short-cut on finding the missing heir, and sets in motion a series of interactions with the rest of the family that results in death. Add in an old fraud, the return of Dietz to her life, and some emerging feelings for the prodigal son, and it is a full novel.
.
WHAT I DIDN'T LIKE:
A couple of the final pieces to the puzzle are completely hidden until the last chapter, and it's not even Kinsey who finds them. I didn't feel it was playing fair with the reader, holding back some key elements until the end that no one had a chance to see being uncovered so much as like working on a puzzle for several days only to have someone spoil the ending by just telling you the solution.
.
DISCLOSURE:
I received no compensation, not even a free copy, in exchange for this review. I am not personal friends with the author, nor do I follow her on social media.

Kinsey is hired to find Guy Malek, missing son of a millionaire who just died, so that the estate can be divided four ways. She finds the man quickly and figures the case is finished. However, one of the brothers is killed, and the other three are prime suspects. The case is not an easy one, and each of the brothers has a good reason to get rid of the fourth. Add some family problems, some romance, and Grafton has turned out another good book.