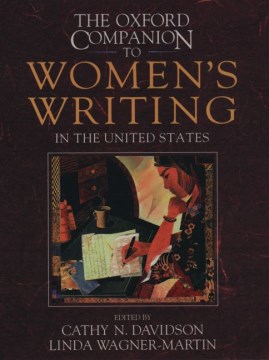 The Oxford Companion to Women's Writing in the United States

Book News
A gold mine of information about women's writing, history, and concerns, contained in 771 entries written by both unknown and well-known cultural and literary critics. Includes biographical profiles of important poets, novelists, playwrights, and the many writers who have made contributions in other fields, as well as covering the many varied issues that have been explored by and have influenced the lives and work of women writers, including race and racism, violence and sexual harassment, health, AIDS, the Civil War, the publishing world, the art and practice of writing, and contemporary literary criticism. Annotation copyright Book News, Inc. Portland, Or.

Oxford University Press
From Anne Bradstreet's The Tenth Muse Lately Sprung Up in America in the seventeenth century, to Toni Morrison's Nobel Prize in 1993, women writers have woven a rich tapestry of voices across four centuries of American history. Their writings have embraced a marvelous diversity of visions, including those of Emily Dickinson, Gertrude Stein, Cynthia Ozick, Gwendolyn Brooks, Kate Chopin, Maya Angelou, Annie Dillard, Joan Didion, Edith Wharton, Adrienne Rich, Djuna Barnes, and Willa Cather.The Oxford Companion to Women's Writing in the United States provides a comprehensive, authoritative, and highly informative survey of these writers and their work as it illuminates the issues that fired their imaginations.
Here is a goldmine of information about women's writing, women's history, and women's concerns--over eight hundred entries, ranging from brief identifications to extensive essays. The volume boasts contributions by many well-known thinkers, including Susan Faludi writing on backlash, Deborah Tannen on communications between the sexes, Jane Gallop on Lacanian psychoanalysis, Nell Irvin Painter on Sojourner Truth, and Trudier Harris on Toni Morrison. There are nearly four hundred biographical entries, touching on not only important poets, novelists, and playwrights (including such modern figures as Wendy Wasserstein, Anne Tyler, Alice Walker, and Tama Janowitz), but also women writers who have made important contributions in other fields, such as Betty Friedan, Rachel Carson, Margaret Mead, Aimee Semple McPherson, Elizabeth Cady Stanton, and Susan B. Anthony. Perhaps most important, there is extensive coverage of the many personal, cultural, and historical issues that have been explored by and have influenced the lives and productivity of women writers, including AIDS, race and racism, violence and sexual harassment, the Civil War, the civil rights movement, and much more. There is also coverage of the publishing world (including bookstores and women's presses), the art and practice of writing, and contemporary literary criticism (including lesbian literary theory, black feminism, and deconstruction).
The women who have written beautifully, poignantly, tenderly, humorously, or powerfully about America and American lives are indeed a heterogeneous group.The Oxford Companion to Women's Writing in the United States captures this remarkable diversity, painting a fascinating portrait of women and women's writing in America.