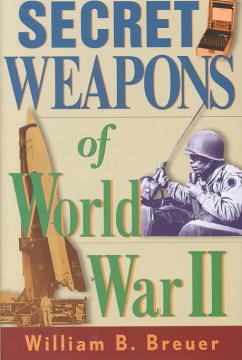 What most people don?t realize is that the decisive factor in the outcome of the Second World War wasn?t the brilliance of the famous Allied military leaders and statesmen. As noted military historian William Breuer proves in this ingenious volume, victory or defeat in the twentieth century?s climactic conflict depended on the secret war of wits that occurred between the scientists, mathematicians, and codebreakers on each side.

In Secret Weapons of World War II, we learn about these fascinating figures, many of whom have thus far gone unnoticed in history?s telling of the tale, including

Sergeant C. W. H. Cox, the son of a postman and a former actress?and the least likely candidate to perform the century?s most audacious heist . . .

Wernher von Braun, a German technical director who helped mastermind the revolutionary supersonic rocket that threatened to bring England to her knees . . .

Critical acclaim for William B. Breuer?s Top Secret Tales of World War I

"As evidenced time and again by the prolific Breuer, WWII continues to be a source of absorbing espionage tale. . . . This is a book for rainy days and long solitary nights by the fire. If there were a genre for cozy nonfiction, this would be the template." ?Publishers Weekl

"A book perfect for the curious and adventure readers and those who love exotic tales and especially history buffs who will be surprised at what they didn?t know. Recommended for nearly everyone." ?Kirkus Review

Baker & Taylor
The weapons developed by both Allied and Axis nations are chronicled here in a fascinating chronicle of technological achievement, from secret code machines and electronic guidance systems to high-tech radar.

Book News
A popular military history which focuses on the inventors, scientists, code makers, code breakers, and others who worked to give one side or the other the technological advantage in World War II. Among the many stories told are the efforts of physicists to develop the atomic bomb, failed attempts to develop a wire net launching system to snare Luftwaffe planes over England, and experiments with aircraft carriers. The stories told are generally brief and there is no over-arching narrative or conclusion. Annotation c. Book News, Inc., Portland, OR (booknews.com)