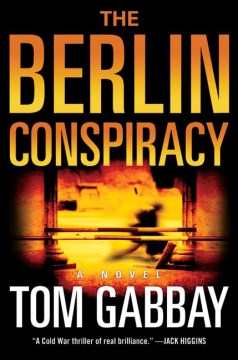 Baker & Taylor
Former spy Jack Teller finds himself back in the world of espionage, when, just days before President John F. Kennedy is scheduled to visit the city, a mysterious contact claims to have important information, and he wants to share it with Jack. 50,000 first printing.

Berlin. June 1963.
Jack Teller shouldn't be here.
But is a CIA agent ever really out of the game?

Jack Teller left the Company after the Bay of Pigs fiasco, hoping to live a quiet life on a remote beach in south Florida. But it's not turning out that way. Just days before President John F. Kennedy is scheduled to deliver his historic speech at the Berlin Wall, a mysterious message is sent to the Berlin station of the CIA from a Colonel in the East German Stasi. He claims to have important information, but he will disclose it to only one man: Jack.

The Berlin Conspiracy races across the terrain of John le Carré, Frederick Forsyth, and Robert Ludlum, while introducing a brilliant, fresh voice in espionage fiction. Tom Gabbay has created an unforgettable twentieth-century hero in Jack Teller, and populated his story with a wealth of multidimensional characters -- men and women who exist in the parallel but inter-secting worlds of a divided Berlin when it was the crossroads between communist Soviet Union and the West.

The intelligence provided by this Stasi official, if true, exposes a treacherous plot originating from the highest levels of the U.S. government. Jack's handlers, including his former mentor Sam Clay, believe it's a communist setup, and Jack is playing the part of the expendable pawn. But after a face-to-face meeting with his informer, Jack isn't so sure and plunges into a risky search for the truth. After receiving threats from higher-ups in the CIA, he soon finds himself alone, at the axis of the Cold War, in a city that holds many dark secrets -- including some from Jack's own storied past.

In the world of espionage, lies are currency and nothing is what it seems -- a truth Jack would do well to remember if he wants to live to prevent a global catastrophe. A unique and brilliantly plotted debut thriller featuring dark twists, breathtaking action, and unforgettable characters, The Berlin Conspiracy is spellbinding to its hair-raising end.

Baker
& Taylor
Former spy Jack Teller finds himself back in the world of espionage, when just days before President John F. Kennedy is scheduled to visit the city, a mysterious contact claims to have important information that he wants to share with Jack.

Someone gave me this book and I thouight it would be less than OK. What a surprise. I thought it was a great book, especially for baby boomers, who were around when John F. Kennedy was President. Recommend this book!

this is the book Frank is reading on the train in The Tourist.