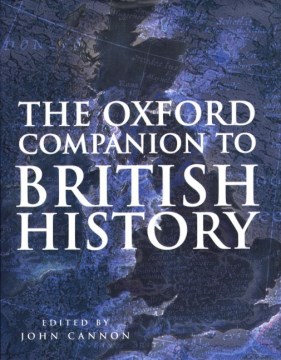 The Oxford Companion to British History

Baker & Taylor
Four thousand alphabetical, cross-referenced essays and entries, written by 120 of the leading scholars of the United Kingdom and Ireland, along with twelve maps, offer a gold mine of information on British history from Roman times to John Major. UP.

Book News
From abbeys and priories to Zutphen, the (1586) battle of, former modern history professor Cannon (U. of Newcastle upon Tyne) leads over 100 contributors in alphabetically chronicling two millennia of the political and sociocultural history of Britannia the Roman name for the British Isles, revived the same year as the Zutphen debacle. The Green Party and the Beatles are featured along with the monarchs and Shakespeare. To facilitate multidisciplinary browsing, the 4,000-plus entries are cross-referenced and accompanied by maps and genealogies. Annotation c. by Book News, Inc., Portland, Or.

Oxford University Press
Few countries can boast a history as endlessly intricate and fascinatingly complex as Britain. From the Glorious Revolution to the invention of golf, British history is a rich tapestry of enigmatic personalities, contentious politics, indelible legacies, and stunning achievements. For centuries, Britain has been a world leader and innovator, yet its distinct culture, with its fondness for royalty, lukewarm ale and left-hand side driving, remains, at times, impenetrable to the outsider. Now, in The Oxford Companion to British History, readers have a comprehensive and authoritative perspective into all the idiosyncrasies and nuances that make British history so uniquely British.
Featuring 4000 A-Z entries written by 120 of the leading political, social, economic, and military scholars in the United Kingdom and Ireland, this single volume reference offers a wealth of information on British history. The Oxford Companion to British History covers all facets of this storied subject, from the arrival of Julius Caesar on British shores in 55 B.C. to John Majors ill-fated back to basics initiative in the 1990s. Readers can explore this rich 2000-year history with insightful and meticulous descriptions of every important person, place, date, and movement in this fabled country, including the political legacies of the Magna Carta and the Gunpowder Plot, the legendary reigns of such monarchs as Henry VIII and Queen Victoria, the social movements of the Luddites and the Parlimentarians, cultural and artistic phenomena like Romanticism and neo-classical architecture, and the scientific achievements of Newton and Darwin. Here the etymology of the cardigan sweater (named after Crimean War hero James Brudenell, 7th Earl of Cardigan) and the biography of Mary Wollstonecraft, author of Vindication of the Rights of Women (1792), get equal billing with such familiar figures as William Shakespeare, Oliver Cromwell, and Elizabeth I. In addition, general interest articles on topics like the monarchy and the Second World War are interspersed with more esoteric subjects like Ida, the sixth century king of Bernicia, to create a complete reference of British history. Whether your interest lies in the Beatles, Robin Hood, Northern Ireland, John Locke, the Tower of London, Gothic Architecture, Princess Diana, or beagling (the hunting of hares on foot with the aid of beagle hounds), nothing is slighted.
Designed for ease of use, the Companion offers ample cross-referencing between essay-length articles and short, quick-reference entries, supported by 12 detailed maps and an exemplary general index. Ideal for everyone with an interest in British history, The Oxford Companion to British History is the definitive window into this fascinating world.