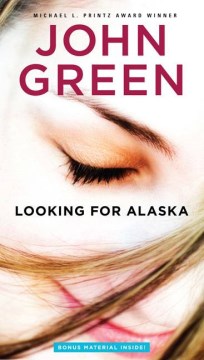 My regret is that after I read 'The Fault in Our Stars' and 'Turtles All the Way Down' I didn't go back to pursue John Green's earlier books.

'Looking for Alaska' is a gut wrenching and life affirming coming of age novel. There is so much to re-read, to appreciate in the profound thoughts and minds of these young people. Some are lost, some are defiant and some are just trying to find their way every day and into adulthood.

I had the privilege of reading a "Special 10th Anniversary Edition" with several of John Green's rewrites, deleted scenes, original drafts, commentary from his editor, a "Q & A with John Green" and "alaska, ten years later: a literary retrospective". They afforded me so much more depth and insight after reading Looking for Alaska.

'Looking for Alaska' will be with me for a long time. I think it's simply wonderful and absolutely deserves "classic" status.

5 Stars and I'm going back to find any/all other earlier John Green books.

This is the first John Green book that I've read and I had really high expectations. Everyone told me how great his books are, but I think they are kind of over-hyped. I know I can't make generalizations on all of his books based on Looking for Alaska, but I expected way more from the story. Each chapter felt like a marathon to complete and I did not feel motivated to read it. Although this book did not live up to my expectations, the writing style is very unique and some characters are interesting. The book isn’t that bad, but not really memorable for me.

John Green’s teenage coming-of-age fictional novel, Looking For Alaska, details Miles Halters’s time at a boarding school where he quickly falls in love with the mysterious, self-destructive Alaska. Miles has an obsession with last words, and he romanticizes the idea of the unknown through his pursuit of the “Great Perhaps”. I thought the book provided an interesting outlook on depression, grief, mortality, and the tumultuous times of adolescents that other young adult novels fail to capture. The lessons written throughout are very vivid and applicable to many people. The characterization was remarkable, and readers could relate to their struggles. The narrator is unreliable with a skewed perspective clouded by his emotions, and it creates a constant feeling of apprehension for what comes next. I wish the novel would have focused more on the side characters, which would have shaped the story more. The ending gave me mixed feelings; it was very conclusive but loose in other lanes. Some questions throughout the novel were unanswered, but it could have been the author’s purposeful vagueness to build the characters further into their potential.

“Bolivar was talking about the pain, not about living or dying. How do you get out of the labyrinth of suffering?”
-Alaska Young

Alaska’s character was my favorite because her personality contained multiple layers, and she was an accurate representation of the toll of grief. This book is haunting through the “what-if” questions posed to the readers, suggesting one choice could have altered the path of the novel. Green’s writing itself was very modern with attempts to create a similarity to teenage terms, and he does an excellent job of drafting a quick-paced plot while structuring great characters. I would recommend this book to anyone! I went into this thinking it would be a lighter romance-centered read, but it delved into complex topics that left me contemplating about the novel well after the conclusion. The execution of the plot was sophisticated, and the writing style is comfortable.

Looking For Alaska is a fictional novel about a teenage boy who is in search of something more than his life is offering, so he decides to enroll in a boarding school. Upon doing this, he is whisked into a whole new world of friends, interesting people, and a sorrowful mystery. I would highly recommend this book to anyone looking to feel an array of emotions, as this book provides everything. Looking For Alaska is beautifully written, and conveys an interesting story through captivating writing.

Honestly, this is a great coming of age story. Although most of the characters aren't super likable, it is enjoyable to read and makes a person stop and think.

I bought it from Chapters years ago, and then lent it to a friend and never got it back. I then borrowed it from EPL and read it to my Fiance, who isn't much of a reader. He loved it.

John Green is such an amazing author, and his book, Looking for Alaska, further proves his amazing talent. Looking for Alaska, which follows Miles “Pudge” Halter as he falls in love with a girl, Alaska. Alaska is mysterious and erratic, and that hooks Miles into her. Miles learns love and how to solve a mystery in this amazing book full of twists, turns, and moments that will make you miss your youth.
This book is fantastic for lovers of mystery and romance. I loved this book so much and will no doubt become one of my favorites. This book in a word is riveting. The movie is also fantastic, but I would highly recommend reading this book either way.
Age Rating : 14+
Star Rating : 9/10

One of my favourites! Such a beautifully told coming of age tale.

This is a sex enhanced non-iterary iece of junk. It has no plot line whatsoever and is a disgrace to the literary talent of our generation

Looking for Alaska is one of John Green’s beautiful stories about pain and suffering in the lives of teenagers. The story focuses on a group of friends that do all the typical things teenagers in high school do, like pulling pranks and going to parties. However, John Green captures more than just the happy times in teens’ lives, he brings in the bad ones too. The story captures the more realistic, difficult times people go through but often chose to hide. So often in movies, TV and books, we see the same stereotypical image of what teenage life is supposed to be like which is more often than not, completely different than what it actually is like. Being a teenager and reading a story like this was so beautiful to me because it encapsulated a much more realistic story where people go through tough things all the time and it’s ok not to be ok sometimes. This story can be dark at moments, but the captivating theme of friendship balances it out to make a genuinely beautiful tale of teenage life. I would recommend this to any teenager that has ever gone through anything that changed them for the better. Rating: 5/5 @Joda of the Teen Review Board at the Hamilton Public Library

Looking for Alaska by John Green is a young adult realistic fiction novel. Miles Halter had always been obsessed with last words, especially the last words of his favorite poet where he talks about “The Great Perhaps”. On his journey to find “The Great Perhaps” Miles decides to go to boarding school because he is bored with his life at home. When Miles arrives at his new boarding school he meets the beautiful and smart Alaska Young, who leads him on the biggest journey he could ever imagine.

Before reading this book I always heard many good things about it so I decided to try it out. It did not meet my expectations. Overall, the book was okay but I personally did not like it that much. I feel like the characters had very stereotypical traits and the storyline was a little bland. There were also some inappropriate parts of the book that would not be very appropriate for a younger audience. On the other hand I liked the way that Green separated his chapters. It was interesting to see a book separated into a nontraditional chapter and kept me reading this book. I also loved the ending of the book. I felt that it really tied everything together and did not leave any loose strings.

In short, Looking for Alaska is a good book for anyone who is a fan of John Green. If you liked any of his other books I am sure you will like this one as well! -Eunchae, Grade 10

g2021g thinks this title is suitable for 14 years and over

blue_gorilla_895 thinks this title is suitable for 13 years and over

Ravindersidhu thinks this title is suitable for 15 years and over

pucko thinks this title is suitable for 12 years and over

pinkbumblebee thinks this title is suitable for 13 years and over

MBennett2002 thinks this title is suitable for 13 years and over

EmilyA18 thinks this title is suitable for 14 years and over

serineg thinks this title is suitable for 13 years and over

VV12 thinks this title is suitable for 14 years and over

I finally decided that people believed in an afterlife because they couldn’t bear not to.

'"Francois Rabelais. He was a poet. And his last words were, 'I go to seek a Great Perhaps.' That's why I'm going. So I don't have to wait until I die to start seeking a Great Perhaps."'

"So I walked back to my room and collapsed on the bottom bunk, thinking that if people were rain, I was drizzle and she was a hurricane."

We need never be without hope because we can never be irreparably broken.

"If people were rain, I was a drizzle and she was a hurricane." - Pudge (Miles)

"For the love of God, shave your back!" - The Colonal

So I walked back to my room and collapsed on the bottom bunk, thinking that if people were rain, I was drizzle and she was a hurricane.

Other: There is some smoking and substance abuse throughout.

Sexual Content: There are a couple scenes throughout the story that would be catorgized as innapropirate and sexual. There is one scene in particular that is not sutiable for people under the age of 14 at least. I read this when i was about 12 and it wasn't appropriate and I didn't quite understand what was happening.

Frightening or Intense Scenes: The point of the story could be intense or frightening for some people.

Coarse Language: There is quite a bit of cussing throughout as well.

Other: Repeated smoking and drinking of characters

Sexual Content: a little bit of kissing and one very detailed sex scene

Miles has just moved to a new boarding school where he meets Chip "The colonel", Takumi the hip hop enthusiast and the gorgeous Alaska. As Miles starts to fall for Alaska and pull pranks with her, something tragic happens that shakes Miles world.

A beautiful novel that is truly indescribable. It's filled with laughter, sadness but also hope. It opens your eyes to see more than what's on the outside. To not just look, but to really see.

Looking for Alaska is really about the great adventure of Miles in a prep school in Albama. Miles is your average kid, with grades, some friends, basically normal in most ways that a 16 year old can be! The thing is Miles, is known for memorizing the last words of famous people, and this search eventually leads him to search for his Great Perhaps, (his real adventure/meaning in life. After moving to the prep school, Miles meets Colonel, Takumi, and the unique Alaska Young! Miles' whole life is turned upside down through his many adventures with this crew.Between life of a pressured 16 year old, and just trying to discover how to "escape from this labyrinth of sufferring" Miles' has his hands full!