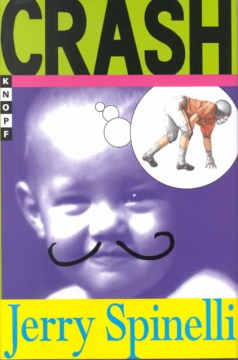 The children’s author of “Stargirl” takes on bullying again, though this time told from the viewpoint of the bully. He (the bully) picks on the neighbor kid because he (the neighbor) has a weird name, is a Quaker, a vegetarian, and always seems cheerful. Readers of “Stargirl”: does this sound familiar? Unlike that book, though, there are no heart-wrenching moral battles, no talk-show turned inquisition, no figurative sacrifice. This was probably written for a couple of grade-levels lower. The bully grows up, finds out about the wider world, experiences a tragedy, and eventually changes his attitude. The tone of the book is mostly humorous, and none of the bullying pranks are particularly serious or hurtful, so this is much lighter than its subject would make it seem. I had a hard time seeing how kids would draw the lesson from it that bullying is bad. Maybe they would read it simply as a funny story. Then again, perhaps they would cheer the unexpected ending.

John ‘Crash’ Coogan is an aggressive seventh-grader who has been rough since he was a little boy. The arrival of a Quaker boy and his sick grandfather make John reconsider his attitude and beliefs about life. Ages 6-12.

This story’s theme—the making and unmaking of a bully—makes it bit of a rarity among YA books. Crash’s awakening to the wrongness of his ideas is a gradual journey, brought on by personal issues that don’t necessarily make themselves known to outsiders. Crash’s evolution from hard-headed, hard-knuckled bruiser to (somewhat) sensitive teenager who thinks about others is a convincing one, with amusing little side trips along the way. For a different experience in YA fiction, “Crash” definitely passes muster.

I liked it. Very interesting.

Ugh. It's really hard to read a book (even a short one) when you can't stand the main character, especially when he's the narrator! Spinelli did a great job writing it (you're suppose to hate the kid) but it didn't make it pleasant to read. It teaches great values and the kid changes through the story (duh, because it's a YA novel) but I could barely muscle through.

yeah this book is good and funny.

really good book to readers who like realistic-fiction books!

violet_dog_2235 thinks this title is suitable for All Ages

I was looking for a book that showed the circumstance in school. So, I found this booked that did. John Coogan, Crash is what people call him, is the main character of this book. He is a grade 7 boy who is good at football, very lively, and active. Crash has a younger sister called Abby. Crash has a friend, well Crash doesn't think him as a friend, named Penn Webb. He is a boy that is a vegetarian, a Quaker, a cheer leader, and he is very kind, even dull because he is too kind. Mike, Crash's friend, and Crash begins to tease Webb for fun. The scene I remember the best is when Crash puts mustard in Webb's shoe while Mike passed him the shoe. What I felt was 'Why do people bully somebody just because they are a bit different?'. This book was fun and understandable because it was similar with any schools outside. It had a lot of interesting events.

I have finished a book called “CRASH” by Jerry Spinelli a realistic-fiction book. In this book the central idea or main idea is that the protagonist is John Coogan, people just call him Crash. The story is about him going to school with his friend Mike. One day he met a new kid in his neighborhood he wanted to be friends with him his name was Penn Webb who is a vegetarian (that means he doesn’t eat meat like Ms. Flagg.) John is not a vegetarian. John wanted to play on the football team this year so he and Mike went for the try out and they had made the team. Webb; however, did not join the football team or other sports team he went to join for the cheerleading team. That was the second that everything had changed. John didn’t wanted to be Webb’s friend anymore since he had found out that he is trying to act like a girl. So Mike and John went to make jokes about him and his cheerleading. Then one day Mike said something so awful that John had to say stop.

I am zoo bored