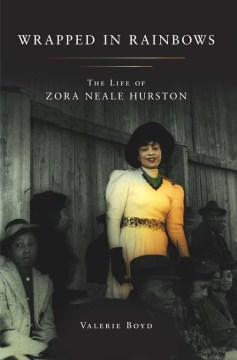 The Life of Zora Neale Hurston

Baker & Taylor
Traces previously unexplored aspects of the career of the influential African-American writer, citing the historical backdrop of her life and work while considering her relationships with and influences on top literary, intellectual, and artistic figures. 60,000 first printing.

Baker
& Taylor
Traces the career of the influential African-American writer, citing the historical backdrop of her life and work while considering her relationships with and influences on top literary, intellectual, and artistic figures.

Simon and Schuster
A woman of enormous talent, remarkable drive, and rare intellectual prowess, Zora Neale Hurston published four novels, two books of folklore, an autobiography, many short stories, and several articles and plays over a career that spanned more than thirty years. Although she enjoyed some popularity during her lifetime, her greatest acclaim has come posthumously. All of her books were out of print when she died in poverty in 1960, but today nearly every black woman writer of significance -- including Maya Angelou, Toni Morrison, and Alice Walker -- acknowledges Hurston as a literary foremother. And her masterpiece, Their Eyes Were Watching God, has become a crucial part of the American literary canon. Yet, despite the recent renewed interest in Hurston's work, she remains, as a friend and contemporary described her, "a woman half in shadow."

Wrapped in Rainbows -- the first biography of Zora Neale Hurston in twenty-five years -- illuminates the complexities of an extraordinary life. Born in Alabama in 1891, Hurston moved with her family to Eatonville, Florida, when she was still a toddler. In this close-knit community -- the first incorporated all-black town in America -- she spent a pleasant childhood, happily imbibing the rich language and folk culture of the rural black South. When Hurston was still a girl, her mother died, and her father's swift remarriage led to the family's dispersal. Hurston spent the next decade wandering in search of parental figures, working menial jobs, and charting her own course into adulthood. Reinventing herself at the age of twenty-six, she entered high school in Baltimore by claiming to be ten years younger -- a fiction she would maintain throughout her life. Hurston went on to attend Howard University and Barnard College, and during this time launched her writing career in the midst of the blossoming Harlem Renaissance. In New York, she developed relationships with luminaries such as Langston Hughes, Ethel Waters, Fannie Hurst, and Carl Van Vechten. Hurston periodically left New York to travel the country (and the world) collecting black music, poetry, and literature -- becoming one of the most important folklore collectors of her time, as well as one of the most enduring writers of her century.

Wrapped in Rainbows presents a full picture of Hurston as both a writer and a woman, shedding new light on her public and private lives. Drawing on meticulous research and a wealth of crucial information that has emerged over the past twenty years, Valerie Boyd delves into Hurston's thirst for the limelight, her sexuality and short-lived marriages, her mysterious relationship with Vodou, and her occasionally controversial political views. With the Harlem Renaissance, the Great Depression, and World War II as historical backdrops, Wrapped in Rainbows not only positions Hurston's work in her time but offers implications for our own.

Featuring more than thirty-five black-and-white photographs -- including some that have never been published -- Wrapped in Rainbows is an eloquent profile of one of the most intriguing cultural figures of the twentieth century.