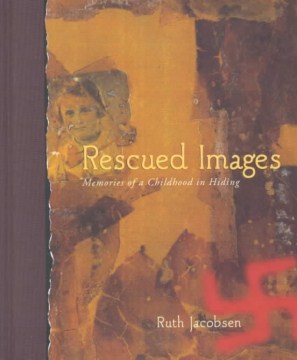 Memories of Childhood in Hiding

Baker & Taylor
Forty years after surviving a childhood destroyed by the Holocaust, the author finds an album of family photographs and begins piecing together her past through a series of collages and long suppressed memories.

Ruth Jacobsen spent her first childhood in Germany. It ended one night when she was six years old and hiding in terror as she watched people being thrown from windows. It was Kristallnacht, the Night of Breaking Glass.

Her family fled and found haven in the idyllic Dutch village of Oud Zuylen. There Ruth became a child again.

When she was eight, the Germans invaded Holland. When she was nine, her grandmother was put on a train and never seen again. Soon she was wearing a Jewish star on her coat. When she was 10, she was separated from her parents. Frightened and alone, she went from house to house, hiding from the Nazis in the homes of strangers. Ruth Jacobsen's childhood was over forever. For the rest of her life she tried to forget her loss.

One day, forty years after the war, she opened an album of family photographs that had lain in a box at the bottom of a closet, untouched.

"My fear had always been that I would break down or become hysterical," she writes. Instead, she transformed the images into art, creating a series of vivid collages that pieced together her shattered childhood. As she worked, long suppressed memories came to the surface. She wrote them down.

The result is a unique document of a life and a time. Rescued Images combines Ruth's collages and her moving memoir of the wrenching events of a half century ago. Young Ruth Jacobsen is brought back to life on these pages: frightened and bewildered, buffeted by forces she cannot understand or control, bending but never breaking.

The story of a holocaust survivor. Ruth Jacobsen's childhood was spent in hiding, separated from her parents and living in the homes of strangers. She became an accomplished collage artist, and this book of memories and collages is based on family photos.

Baker
& Taylor
Forty years after surviving a childhood destroyed by the Holocaust, the author found an album of family photographs and began piecing together her past through a series of collages and long suppressed memories.