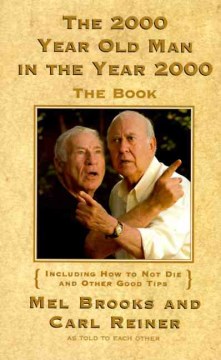 The Book, Including How to Not Die and Other Good Tips

Baker & Taylor
An impromptu comedy routine, created by the two comedians in 1950 regarding a two-thousand-year-old man and the dilemmas he faces, shares hilarious views on such issues as religion, taxes, fried foods, fad diets, violence in films, and many other topics. 150,000 first printing.

HARPERCOLL
The 2000 Year Old Man was actually born in 1950, when Carl Reiner bought a $138 Revere tape recorder, plugged in the microphone, and instead of saying, "Testing, testing," turned to Mel Brooks and asked, "Is it true that you were at the scene of the Crucifixion some 2000 years ago?" As Brooks' imagination took flight, the old man uttered his first remembrance of things past with a moan of "Oooooooohboy." And then: "I knew Christ, Christ was a thin lad, always wore sandals. Hung around with 12 other guys. They came in the store, no one ever bought anything. Once they asked for water."

Carl Reiner and Mel Brooks ad-libbed their first interviews between the miraculous ancient sage and the reporter covering his history-making arrival in the United States. The 2000 Year Old Man knew everyone from Jesus to Shakespeare, Cleopatra to Paul Revere. He was there when men discovered women, and he dated Joan of Arc. The feisty raconteur had been married several hundred times. He had 42,000 children -- "and not one comes to visit me." The Jewish Methuselah had something to say about everyone and everything -- from religion to soul kissing, from taxes to nectarines: "Half a peach, half a plum. It's a hell of a fruit!" Brooks never knew what Reiner was going to ask, and Reiner only knew that he would never get the same answer twice. Reiner calls it "writing with the mouth."

Most of the targets Reiner and Brooks skewered between 1961 and 1974 on record albums are still with us, including food, cigarettes, the power of advertising, selling America to Japan, neglected children, fear of homosexuals in the military, inadequate health care, fad diets, violent films and pretentious filmmakers. In this millenial update of the cult comedy classic, the 2000 Year Old Man offers his unique wit and wisdom on everything from the Mars landing to shopping malls; homeopathy to the invention of the infomercial; his own dietary secrets, from eating a swirl to his time-tested Seven-Day Diet; and pet peeves, from rap music to "If you know the extension, press one..." The humor of The 2000 Year Old Man in the Year 2000  is a hilarious antidote to the millenial literature of the '90s.

Baker
& Taylor
The comedians' impromptu comedy routine regarding a two-thousand-year-old man and the dilemmas he faces shares humorous views on religion, taxes, fad diets, and other topics

This wasn't as funny as I thought it would be.

Veepea thinks this title is suitable for 16 years and over