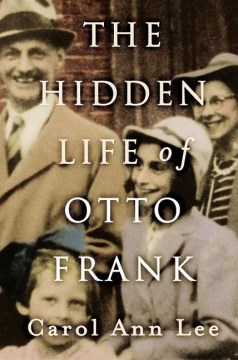 The Hidden Life of Otto Frank

Baker & Taylor
A portrait of Anne Frank's father, the only member of the secret annex to survive Auschwitz, reveals startling information about his privileged youth, arranged marriage, experiences in the concentration camp, decision to publish Anne's diary, flight to Switzerland, and relationship with the annex's betrayer.

In this shocking and definitive new biography, Carol Ann Lee provides the answer to one of the most heartbreaking questions of modern times: Who betrayed Anne Frank and her family to the Nazis? Probing this startling act of treachery, Lee brings to light never-before-documented information about Anne's father, Otto Frank, and the individual who would claim responsibility -- and their terrifying and complicated relationship that continued until the day Frank died.

With The Hidden Life of Otto Frank, Carol Ann Lee presents an astonishing and moving portrait of a man whose life, both charmed and cursed, was interwoven with one of the most momentous events of the last century as the father of Anne Frank. Based on impeccable research into rare archives and filled with excerpts from the secret journal that he kept from the day of his liberation from Auschwitz until his return to the secret annex in 1945, this landmark biography explores every facet of Frank's life. The publication of Anne Frank's diary turned this quietly heroic man into a legend, but until now, apart from a few basic facts, almost nothing has been written about Otto Frank's own extraordinary life.

The father of the most famous young girl of the twentieth century, Otto Frank was born a month before Adolf Hitler, and grew up in a wealthy German Jewish household. In World War I, he fought for Germany -- which he believed to be his homeland -- as an officer in the trenches of the Somme. Lee documents these privileged early years, when Frank and his family were models of wholly assembled European Jewry. She also reveals the full story behind Frank's first cruelly thwarted love affair, as well as the truth about his subsequent arranged marriage to Anne's mother.

After struggling to establish a business in Amsterdam, Frank and his family spent happy years together before the war. Then came their period in hiding, their eventual betrayal, and their internment in the death camps of Poland and Germany. For the first time, Frank's experiences during and after Auschwitz -- and during his return to Amsterdam, where, wholly destitute, he lost everything "except life" -- are told in full. The subsequent delivery of his daughter's diary, and the publishing phenomenon that ensued, helped him begin to recover.

Deeply moving and powerfully honest, The Hidden Life of Otto Frank authoritatively brings into focus a little-understood man whose story illuminates some of the most harrowing and memorable events of the last century.

Book News
Published in 1947, The Diary of Anne Frank told the world of a young girl's experiences as she hid with her family from the Nazis for 25 months before being betrayed and sent to a concentration camp. This volume is the first biography of Anne's father, Otto. Coverage includes his upbringing in a wealthy German Jewish household, his military service during WWI, and his experiences during and after his captivity in Auschwitz. Annotation (c) Book News, Inc., Portland, OR (booknews.com)

The one thing that everyone knows about Otto Frank is that he is the father of Anne Frank. What they don''t know about him may surprise you! He was a tireless proponent of peace and the message that everyone is basically a good person deep down inside thanks to his daughter''s writings. He never stopped trying to get that message to the world. He was her protector as well and yet he selflessly shared his child with the world. How he survived and how he went on without the other 3 members of his family is like reading about a modern day miracle. A true story of what positive things can come out of absolute tragedy!

rima_gabrielle thinks this title is suitable for All Ages