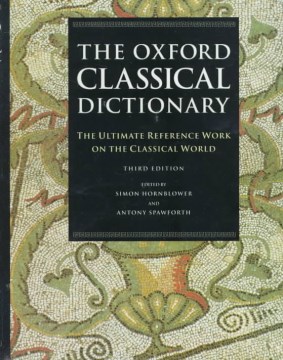 Baker & Taylor
The most authoritative and comprehensive dictionary of classical history and culture available contains six thousand short essays on every aspect of the Greco-Roman world and the ancient world in general, including eight hundred entries added since the second edition. UP.

Book News
In 6,000 entries ranging from long articles to brief definitions, the third edition incorporates the insights and interests of a new generation of classical scholars. Readers will find coverage of women in the ancient world with entries on abortion, breastfeeding, and motherhood; sexuality including homosexuality, love and friendship, contraception and pornography; and Jews and early Christians. In addition, thematic articles reflect the current emphasis on multidisciplinary approaches to classical studies. These articles include anthropology and the classics, Marxism and classical antiquity, and literary theory and classical studies, while others examine issues of general interest such as race, class struggle, ethnicity, alcoholism, and suicide. Annotation c. by Book News, Inc., Portland, Or.

Baker
& Taylor
Over 6,000 entries cover terms, places, and personalities significant in the study of ancient Greece and Rome

Oxford University Press
For almost half a century, the Oxford Classical Dictionary has been the unrivaled one-volume reference work on the Greco-Roman world. Whether one is interested in literature or art, philosophy or law, mythology or science, intimate details of daily life or broad cultural and historical trends, the OCD is the first place to turn for clear, authoritative information on all aspects of ancient culture. Now comes the Third Edition of this redoubtable resource, 20 per cent larger than the previous edition, with virtually every entry rewritten to bring it up to date with current scholarship, and with over 800 new entries that reflect the greatly expanded scope of classical studies.
Here, in over six thousand entries ranging from long articles to brief identifications, readers can find information on virtually any topic of interest--athletics, bee-keeping, botany, magic, Roman law, religious rites, postal service, slavery, navigation, and the reckoning of time. The Dictionary profiles every major figure of Greece and Rome, from Homer and Virgil, to Plato and Aristotle, to Tacitus and Thucydides, to Julius Caesar and Alexander the Great. (The OCD also covers many important but lesser known figures who will not be found in other reference works.) Readers will find entries on mythological and legendary figures, on major cities, famous buildings, and important geographical landmarks, and on legal, rhetorical, literary, and political terms and concepts. Equally important, the OCD features extensive thematic articles that offer superb coverage of topics of interest to both scholars and general readers, exploring everything from medicine and mathematics to music, law, and marriage.
In addition, there are over 800 completely new entries in the Third Edition, additions that reflect the insights and interests of a new generation of classical scholars. Readers will now find substantial coverage of women in the ancient world (with entries on abortion, breast-feeding, childbirth, housework, midwives, menopause, and motherhood, among many others), sexuality (homosexuality, love and friendship, contraception, pornography), the Far East (with entries ranging from Gandhara to the Persian Gulf), Jews (Dead Sea Scrolls, Pharisees, rabbis, Talmud), and early Christians (churches, pilgrimages, St. Paul). In addition, there are many more thematic articles than in previous editions, some of which reflect the new emphasis on multidisciplinary approaches to classical studies (such as Anthropology and the Classics, Marxism and Classical Antiquity, and Literary Theory and Classical Studies), while others examine issues of general interest to modern readers (race, class struggle, ecology, ethnicity, alcoholism, incest, suicide, pollution, propaganda, literacy, and much more).
Finally, the OCD boasts contributions and guidance from some of the finest classical scholars in the world. In addition to the superb efforts of general editors Hornblower and Spawforth, there were fifteen Area Advisors, including such respected figures as Martha Nussbaum (philosophy), Tony Honore (Roman law), Patricia Easterling (Greek literature), John Matthews (late antiquity), Geoffrey Lloyd (maths and sciences), Helen King (women's studies), Ernst Badian (Roman Republican prosopography), and Emily Kearns (Greek myth and religion). And among the many eminent authorities who have offered contributions are Albert Henrichs, Fritz Graf, Gian Biagio Conte, Oswyn Murray, Elaine Fantham, Julia Annas, J.J. Pollitt, Michael Jameson, and over three hundred others--a truly international team. Indeed, the aim throughout has been to secure the best experts on the topics covered, wherever in the world they happen to be. Thus, in the area of Greek religion, for instance, contributions have come from Canada, France, Switzerland, Germany, the Netherlands, Great Britain, and the United States.
As an authoritative one-volume guide to all aspects of the ancient world--political, economic, philosophical, religious, artistic, and social--the Oxford Classical Dictionary has no equal in any language. It is the definitive summation of classical scholarship as it stands today.