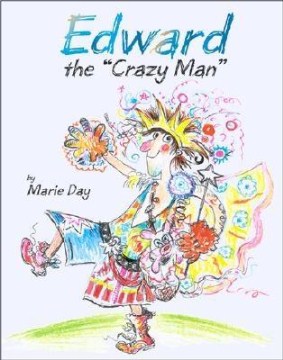 Baker & Taylor
Years after being saved from a traffic accident by a homeless man notable for the striking outfits he puts together out of found objects, Charlie sees the man again and gives him a job in his theatrical costume business.

Perseus Publishing
Edward the Crazy Man” is a touching, funny, and humane tale of one boy’s efforts to help one man and change perceptions about homelessness and schizophrenia. Everyone called him the Crazy Man.” But Charlie loved the sparkling blue eyes and fantastic outfits of this strange man on the street. One day Charlie overheard another kid making fun of the Crazy Man and a fight broke out. Charlie was punched and fell into the path of an oncoming car, but just in time he was snatched out of the way by the Crazy Man. Years later, Charlie gets the chance to repay the Crazy Man. He hires Edwardthe man’s real nameas a designer at his costume factory, and Edward’s creativity saves the day. A brief afterword by the author engages children in the real-life stories of others like Edward.

Edward the Crazy Man is a story of triumph over misunderstanding. It is a touching and funny, humane, and dynamic tale of one boy's will to help one man and to change perceptions about homelessness and schizophrenia.

When Charlie was a boy, he would encounter a man on the streets that everyone called the Crazy Man. But Charlie saw something in him that others did not. Charlie saw the man's bright blue eyes that glittered like stars and he loved the fantastical costumes that the man concocted from things people threw away.

One night Charlie went through his own garage and carefully chose things that he thought the Crazy Man might like. Charlie left them out where the man would find them. The next day at the crosswalk the class bully made fun of the Crazy Man. Charlie and the bully began to argue, and Charlie was punched in the stomach. As Charlie began to fall, someone snatched him from the path of a speeding car. Charlie saw the Crazy Man, in a fabulous outfit made from all the treasures that Charlie had left, disappear quickly down the street. The Crazy Man had saved Charlie's life. But after that day Charlie did not see the Crazy Man around his neighborhood again.

Charlie grows up and becomes a costume designer. He creates marvelous outfits for famous people to wear. Walking home one night, Charlie recognizes the Crazy Man, homeless on the street. Wanting to do something for him, Charlie leaves a card with the message, "I would like to help you -- trust me."

Weeks later Charlie gets his chance to help. The Crazy Man is taken to the hospital, where they discover that he has an illness that affects his brain. The police find Charlie's card and contact him. Remembering the wonderful costumes the Crazy Man used to make, Charlie offers "Edward" -- for that is his real name -- a job at the costume factory.

When Edward begins to work, most people do not understand him because he talks in loud voices to him-self and is very private. After the famous rock star Krackerjack's luggage is lost at the airport, Edward is just the man to design the new flamboyant, extravagant costume -- but time is tight. Soon everyone has pitched in and the costume is ready, just in time for the concert that night.

A picture book that tells the story of triumph over misunderstanding. It is a touching and funny, humane, and dynamic tale of one boy's will to help one man and to change perceptions about homelessness and schizophrenia. Illustrated throughout in color.