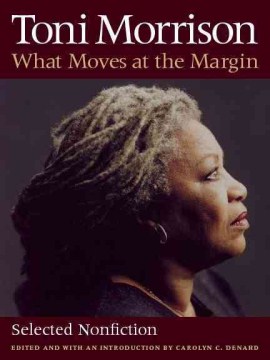 What Moves at the Margin

University of Mississippi
Thirty years of the Nobel Laureate's reflections on life, writing, and other writers

Baker & Taylor
Collects nonfiction writings and speeches by the American author, on topics including family and history, writers and writing, and politics and society.

What Moves at the Margin collects three decades of Toni Morrison's writings about her work, her life, literature, and American society. The works included in this volume range from 1971, when Morrison (b. 1931) was a new editor at Random House and a beginning novelist, to 2002 when she was a professor at Princeton University and Nobel Laureate. Even in the early days of her career, in between editing other writers, writing her own novels, and raising two children, she found time to speak out on subjects that mattered to her. From the reviews and essays written for major publications to her moving tributes to other writers to the commanding acceptance speeches for major literary awards, Morrison has consistently engaged as a writer outside the margins of her fiction. These works provide a unique glimpse into Morrison's viewpoint as an observer of the world, the arts, and the changing landscape of American culture.

The first section of the book, "Family and History," includes Morrison's writings about her family, Black women, Black history, and her own works. The second section, "Writers and Writing," offers her assessments of writers she admires and books she reviewed, edited at Random House, or gave a special affirmation to with a foreword or an introduction. The final section, "Politics and Society," includes essays and speeches where Morrison addresses issues in American society and the role of language and literature in the national culture.

Among other pieces, this collection includes a reflection on 9/11, reviews of such seminal books by Black writers as Albert Murray's South to a Very Old Place and Gayl Jones's Corregidora, an essay on teaching moral values in the university, a eulogy for James Baldwin, and Morrison's Nobel lecture. Taken together, What Moves at the Margin documents the response to our time by one of American literature's most thoughtful and eloquent writers.

Toni Morrison is the Robert F. Goheen Professor Emerita at the Center for Creative and Performing Arts at Princeton University and is the author of Sula, Song of Solomon, Beloved, Paradise, and other novels. She has received the National Book Critics Circle Award, the Pulitzer Prize, and the 1993 Nobel Prize in Literature. Carolyn C. Denard is the author of scholarly essays on Toni Morrison and the forthcoming Cambridge Introduction to Toni Morrison. She is Associate Dean of the College at Brown University and founder of the Toni Morrison Society.

Baker
& Taylor
Three decades of the author's writings about her work, her life, literature, and American society provide an intriguing glimpse into her unique perspective as an observer of the world, the arts, and the changing landscape of American culture, in a compelling collection.