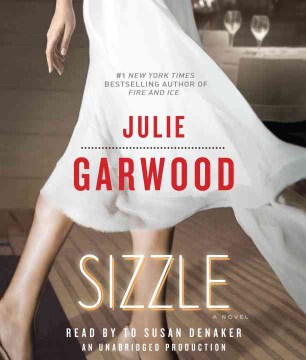 After she accidentally captures a disturbing crime on camera, L.A. film student Lyra Prescott finds her final project for school changing from a documentary film into a work of horror. Terrified, Lyra turns to one of her best friend's many connections: sexy FBI agent Sam Kincaid. As the two work together to end the horror enveloping Lyra's life, they find their attraction for each other intensifying.
Publisher: [New York] : Random House Audio, p2009
Edition: Unabridged
ISBN: 9780739357668
0739357662

Loved this book, it will be hard to stop listening! Great story, romance and excitement along with mystery! READ it you will love it!

I just finished listening to Sizzle... the latest book in Garwood's Buchanan series. I fell in love with FBI Agent Sam. Lyra's grandmother reminded me of a southern version of Stephanie Plum's Grandma Mazur.... Now if Garwood will just hurry up and write more books in the series....

Lyra Prescott, a Los Angeles film student, is closing in on graduation and facing important decisions about her future. She's already been offered a job at her hometown TV station, an opportunity that could ultimately launch her dream career as a film editor. But heading back home would also mean dealing with her overprotective brothers, social-climbing mother, and eccentric grandmother. Unsure of her future, Lyra dives into work on her final school assignment: a documentary transformed by a twist of fate into a real-life horror film.

After she unwittingly captures a shocking crime on camera, a rash of mysterious, treacherous incidents convince Lyra that she's trapped in a sinister scenario headed for a violent ending. Running scared, she turns to her best friend, Sidney Buchanan, whose connections bring dauntless and devilishly handsome FBI agent Sam Kincaid into Lyra's life. As the noose of deadly intrigue tightens and the feelings between them deepen, Lyra and Sam must place their faith in each other's hands - and stand together against the malevolent forces about to break loose.