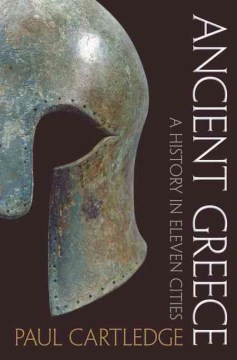 A History in Eleven Cities

Baker & Taylor
Introduces major topics in ancient Greek civilization through the development of eleven characteristic city states, ranging from prehistoric Cnossos through Byzantion, and including the future Marseilles as well as Athens and Sparta.

Oxford University Press
The contribution of the ancient Greeks to modern western culture is incalculable. In the worlds of art, architecture, myth, literature, and philosophy, the world we live in would be unrecognizable without the formative influence of ancient Greek models.
This highly original and stimulating introduction to ancient Greece takes the city as its starting point, revealing just how central the polis ("city-state" or "citizen-state") was to Hellenistic cultural achievements. In particular, Paul Cartledge uses the history of eleven major Greek cities--out of more than a thousand--to illuminate the most important and informative aspects of Greek history. The book spans a surprisingly long time period, ranging from the first examples of ancient Greek language from Cnossus in Crete around 1400 BC to the establishment of Constantinople (today's Istanbul) in 324 AD on the site of the Greek city of Byzantion. Cartledge highlights the role of such renowned cities as Athens (birthplace of democracy) and Sparta, but he also examines Argos, Thebes, Syracuse in Sicily, and Alexandria in Egypt, as well as lesser known locales such as Miletus (home of the West's first intellectual, Thales) and Massalia (Marseilles today), where the Greeks introduced the wine grape to the French. The author uses these cities to illuminate major themes, from economics, religion, and social relations, to gender and sexuality, slavery and freedom, and politics. And throughout, the book explores how these eleven cities differed both from each other and from modern society.
An innovative approach to ancient Greece and its legacy, both in terms of the time span covered and in its unique city-by-city organization, this superb volume provides the ideal concise introduction to the history and culture of this remarkable civilization.

About ten pages into this, I found the book confusing (yes, I did finish it). It wasn't that it was hard to read (although like many academics I've been reading recently Cartledge's phrasing is awkward, his jokes fall flat and he takes to inventing words). It was really that I wasn't sure exactly what he was trying to achieve- and yes, I read the introduction.

It seems Cartledge wants to give an "introduction" to the "themes" present in Ancient Greek history. He wants to do this quickly by offering a brief history in rough chronological order of 11 important cities or, as we might want to say in this case, poleis (plural for polis or, roughly, city-state). He does spend a few pages explaining that while we talk about the city, the city always included attached or associated country-side areas where the majority of the populations usually lived. Thus, we're looking at a city-focused culture rather than an urban one. Good to know- but then he does pretty much nothing with that theme for the rest of the book.

The cities he covers are Cnossos, Mycenae, Argos, Miletus, Massalia, Sparta, Athens, Syracuse, Thebes, Alexandria and Byzantion. You know more than half of these if you have a working knowledge of Greek myths (FYI, he spends very little time talking about the mythology except to cite it's historical implausibilities- and that's not a criticism). You also know some of these cities under different names- Massalia is the modern-day Marseilles, and Byzantion has been known as Constantinople and Istanbul. There were, of course, many other cities he could have covered (I'd still like to know why Corinth and Megara didn't make the cut), but he gives good reasons for why he chose these to cover the range of influences that Greece exerted. He also does successfully make the point that the concept of "Greece" or even "Greek" came much later than identification with the polis, and that even when it did, it hardly discouraged conflict.

Of course he spends a lot of time on Athens and just about apologizes for doing so. He also spends a fair amount of time on Sparta, in part to debunk stereotypes (Sparta was NOT more evil than Athens, and Athenian democracy was both politically expedient and limited by design). He notes that the Athenian model was looked upon with suspicion up until the 1830s when the United States repopularized the idea.

A good amount of time is spent on Alexandria, and part of that is to discuss some of the rise and conquests of Alexander the Great of Macedon (no, Macedon does not get it's own section). But not too much. By the time we're done, he's moved onto Ptolemy, sidetracked a little into the Seleucid empire, moved back to Cleopatra, Antony and Caesar and recounted the destruction of the legendary Library of Alexandria. All in 18 pages.

Athens had a BS democracy; Spartans were a people of few words. Early civilization thrived at Cnossos in Crete. The "Greeks" had a bunch of cities on three continents (Europe, Asia and Africa). But... so what? Why? What was the impulse or idea, other than survival? Strangely enough, the theme of trade is rarely mentioned here. There was *something* about Greek or Hellenic civilization that was special enough to be emulated by the Romans and their cultural descendants, but the end of the book, we're still not sure exactly what that was.

It's not an entirely useless book- I didn't realize that Linear A was a Semitic language, for instance and it has a useful glossary, timeline and "who's who"- but this is only going to make you want to read more, and not necessarily in the good way.

I liked the author's previous book on Thermopylae. This one, however, is a different matter. I just found it very difficult to get into and gave up after the first few chapters. It's just not very engaging.