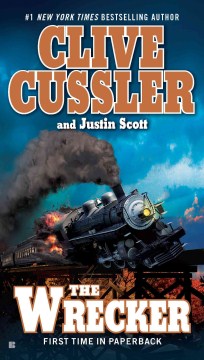 Detective Isaac Bell travels the early-twentieth-century American railways, driven by a sense of justice and a determination to stop a new mastermind reigning terror on a crucial express line in this #1 New York Times-bestselling series.

My first Cussler novel, and the first book i read that wasn't Harry Potter. Mystery is better than The Chase, and does blow it about halfway through, but keeps the action and suspense going and builds up to a spectacular race against the clock. Definitely worth the look.

Fun book. However, I am already getting tired of Cussler. His stories get to repetitive!

fast-moving, set in the early 1900s railroad boom-time. halfway thru we discover who's doing the crimes, but the detective doesn't...how it's resolved--can't tell! worth a read.

Good but dwelled to much on bridge details

If you enjoy Clive Cussler's other books, eg Dirk Pitt, you will also enjoy this series. Looking forward to readirng more of them.

Violence: way more than the first book and really brutal

JihadiConservative thinks this title is suitable for 14 years and over

cpurvis thinks this title is suitable for 15 years and over

It is 1907, a year of financial panic and labor unrest. Train wrecks, fires, and explosions sabotage the Southern Pacific Railroad’s Cascades express line and, desperate, the railroad hires the fabled Van Dorn Detective Agency. Van Dorn sends in his best man, and Bell quickly discovers that a mysterious saboteur haunts the hobo jungles of the West, a man known as the Wrecker, who recruits accomplices from the down-and-out to attack the railroad, and then kills them afterward. The Wrecker traverses the vast spaces of the American West as if he had wings, striking wherever he pleases, causing untold damage and loss of human life. Who is he? What does he want? Is he a striker? An anarchist? A revolutionary determined to displace the "privileged few"? A criminal mastermind engineering some as yet unexplained scheme?

Whoever he is, whatever his motives, the Wrecker knows how to create maximum havoc, and Bell senses that he is far from done - that, in fact, the Wrecker is building up to a grand act unlike anything he has committed before. If Bell doesn’t stop him in time, more than a railroad could be at risk - it could be the future of the entire country