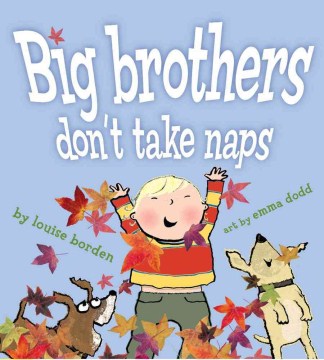 Nicholas, who adores his big brother, James, has discovered that there are many advantages to being an older brother.
For example, James can read – in fact, he can read just about every word in each of his books. He can print his name. He knows a lot (because he attends school), and he always has great ideas about important things like Hallowe’en costumes. He goes to and from school each day on a big yellow bus. He can cross the street by himself.
What’s the very best thing about being a big brother? In Nicholas’ opinion, it’s the fact that big brothers do not have to take afternoon naps … and he longs for the day when he also won’t have to take a nap.
James is a very kind big brother and he’s also Nicholas’ best friend. James plays with Nicholas, reads to him, and teaches him how to print his name and count backwards. He helps him to cross the street, and shares his toys and ideas. And one day, James shares something very special with Nicholas … a secret – a secret which means that Nicholas won’t have to take an afternoon nap much longer … because he too will be a big brother!
This charming picture book has been enhanced with the large, clear illustrations of artist Emma Dodd.