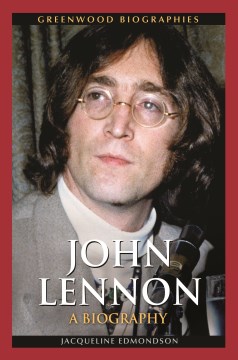 This biography tells the complete story of John Lennon's life, including the controversial influence of his music, art, and philosophy upon the world.

This biography tells the complete story of John Lennon's life, including the controversial influence of his music, art, and philosophy upon the world.

John Lennon was a singer, songwriter, activist, artist, and writer whose life and work left an indelible mark on rock music and the world. Lennon first became famous as the founding member of The Beatles, and his songwriting partnership with bandmate Paul McCartney remains legendary in the history of pop music. Lennon's creative work, which extended well beyond his years as a Beatle and lasted until his final days, still provides enjoyment and inspiration to millions around the world.

This biography provides a comprehensive account of John Lennon's life for students and general readers, integrating information from interviews conducted during his life with published accounts of Lennon from a range of perspectives. It covers the time from his birth in Liverpool in 1940 to his murder in New York City in 1980.

• Photographs of John Lennon are interspersed throughout the book

• A bibliography of sources is provided for those seeking additional information

• Contains two appendixes, the first covering the challenges of writing about John Lennon and an explanation of key sources and the second covering John Lennon's albums

Book News
For high school students and public libraries, Edmondson (education, Pennsylvania State U.) offers a biography of musician and songwriter Lennon (1940-80), best known for his time with the British band the Beatles. The stages of his life and career are Liverpool lad; the artist; the Beatles; Beatlemania; fame, fortune, and fantasy; John and Yoko; moving on; searching for peace in New York City; and getting into another car. Annotation ©2010 Book News, Inc., Portland, OR (booknews.com)

Baker
& Taylor
Profiles the famous rock musician from his birth in Liverpool in 1940 to his murder in New York City in 1980.