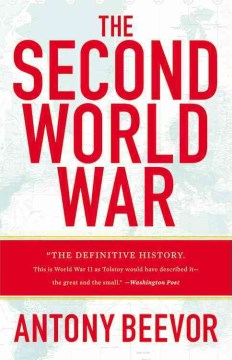 Grand Central Pub
A masterful and comprehensive chronicle of World War II, by internationally bestselling historian Antony Beevor.
Over the past two decades, Antony Beevor has established himself as one of the world's premier historians of WWII. His multi-award winning books have included Stalingrad and The Fall of Berlin 1945. Now, in his newest and most ambitious book, he turns his focus to one of the bloodiest and most tragic events of the twentieth century, the Second World War.

In this searing narrative that takes us from Hitler's invasion of Poland on September 1st, 1939 to V-J day on August 14th, 1945 and the war's aftermath, Beevor describes the conflict and its global reach--one that included every major power. The result is a dramatic and breathtaking single-volume history that provides a remarkably intimate account of the war that, more than any other, still commands attention and an audience.

Thrillingly written and brilliantly researched, Beevor's grand and provocative account is destined to become the definitive work on this complex, tragic, and endlessly fascinating period in world history, and confirms once more that he is a military historian of the first rank.


Baker & Taylor
Presents a single-volume history of the world's largest conflict, from Manchuria in 1939 to the Soviet invasion of northern China six years later, describing the human drama of soldiers, civilians, and political leaders.

Baker
& Taylor
The British historian and author presents a single volume history of the world's largest conflict, from Manchuria in 1939 to the Soviet invasion of northern China six years later, describing the human drama of soldiers, civilians and political leaders.
Using the most up-to-date scholarship and research, and writing with clarity and compassion, Beevor assembles the whole picture of the Second World War in a gripping narrative that extends from the North Atlantic to the South Pacific, from the snowbound steppe to the North African Desert, to the Burmese jungle, SS Einsatzgruppen in the borderlands, Gulag prisoners drafted into punishment battalions, and to the unspeakable cruelties of the Sino-Japanese War.