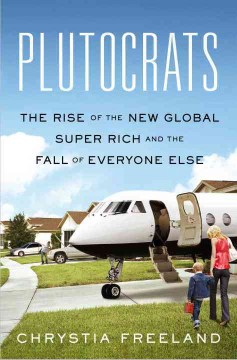 Freeland informs her readers about the attitudes and wealth of the concentrated superelites within American financial and banking institutions, or the technological industries, and how they use their common educational, corporation, and organizational ties to lobby for government legislation in their favor. She discusses the dangers of that influence but also provides the POV of business owners which she then sums up as greed. Since her book was published shortly after the financial crisis of 2008, there is a great deal of emphasis on the bailing out of the American banking institutions by the American government and why legislators were sympathetic to the financiers' situation.

Throughout the book there is an amazing depth of statistical detail, all noted in academic style with a bibliography for further reading on the topic of superelites and their effect on the increasing inequalities among the American social classes. Some of the statistics that I found remarkable were those in which she identifies the numbers of billionaires and multimillionaires not only in the US, but also in the emerging markets of Russia, China, India, and Latin America. Noticeably, Canadians were not listed in those statistics. She effortlessly identifies their education, working background, and connections by placing that info in brackets after the person's name whom she is quoting. Those quotes from high ranking company officials, or from the billionaires themselves, often arise from personal interviews she had with them over a lunch, a coffee, or conference attendance. Her access as a journalist to these powerful people is amazing.

Readers can choose their nuggets of gold from her commentary like the advice given to students to choose studies in finance, math, computer engineering, statistical analysis, or to obtain a degree in business over one in the humanities if they want to become wealthy. However, if students' skills are not in those areas, they can still become wealthy by becoming employed by the super rich, for example, as their aides, entertainers, or exceptional chefs, as the super rich pay generously. It was also interesting to read the effect that occurred when American businesses moved their companies to off shore countries where employee labor was cheaper. While this move was a deterrent to employment and social mobility to the American middle class, the poor in those countries benefitted financially. Another interesting correlation she published was the common educational and economic backgrounds that a majority of the US legislators/politicians had in a certain year with the super rich who managed/owned American financial institutions. These legislators, then, were easily influenced to support the regulations/tax bills/legislation that favored their lobbyists - the financial companies.

Probably, most readers will be interested in Freeland's concluding chapter. She sums up her observations, discussed in her lengthy six chapters, by giving an historical example of what happened to a city which allowed its businessmen to control its laws regarding its economics, trade, and competition. She sees this as insightful advice to the dangers that can follow when legislators bend to the will of those powerful financiers. It's been 8 years since the publication of her book. Would her observations still hold or have they become "historical", or even common knowledge? Students of research in this field will find her very readable book, a winner of the National Business Book Award, most useful.

To get a sense of where our new Finance Minister is coming from. Awaiting a massive exodus of capital! Because one yacht is obviously not enough.

Chrystia Freeland was born and raised in Peace River, Alberta. After finishing her education she became a minister in the present day Justin Trudeau cabinet. She has spent many hours dealing with the U.S.A. over free trade and NAFTA. Her book is an account of the 1% super wealthy who rule over our economy. The book is well written and informative. She regales us with inside stories of the important people she has dealt with on a personal basis. Must reading if one is hoping to understand the complex money machinations that are occuring in today's marketplace.
WM

Ms. Freeland confirms what we the 99% suspect. Interesting insider scoop from a journalist who knows how and where to dig for dirt. Some readers are left wondering why the author has no suggestions on " What should we do"? I don't believe it is the authors responsibility to point out methods. It is up to "us" to be pro active based on the facts we read. It is up to "us", if "we" don't like how the system is rigged against the majority, to do something about it. However,gone are the days when activism was a "community" action. The internet has, if anything, made society into individualism leaving Twitter, Facebook and whatever else to be our placards of voicing frustrations. Ms Freeland knows this because her adversary at the moment is a Plutocrat.

There exists a growing gap between the rich and the poor--that much seems apparent. But did you know the real gap in 2013 is the gap between the top 1% and the top 0.1%? In her well-researched, well-documented new book, Freeland explores the second Gilded Age for the United States in conjunction with the first Gilded Age for developing countries such as China and India. She examines how globalization has created a new culture of free agents who are able to make a killing in the financial markets without regard to how their company, let their country, is faring, as well. As part of the 99%, it is a fascinating read and left me thinking about the direction of global politics and the importance of paying attention. — Anne P., Washburn Library

Before entering politics and becoming Minister of Foreign Affairs in Prime Minister Justin Trudeau’s cabinet, Chrystia Freeland was most known as a respected journalist, writer and editor. In 2012 her book “Plutocrats: The Rise of the New Global Super-rich and the Fall of Everyone Else” was published. In the interesting times that exist currently in North American politics, trade and economics, this well described and interesting analysis of the growing gap between the super-rich, the wealthiest .01% and the average, or less than average earners, makes for a relevant and rather terrifying read.

If you enjoyed the examination of economic inequality, and the power of the super-rich as described in Dark Money, this is an interesting comparable read.

The system is rigged. 1% 'ers. Greed. Poorly educated 99% 'ers. This book exposes a system in epic failure. A system that is a great paint job over a rotten structure. It speaks volumes about the future. Little upside and a downside that should be frightening for the vast majority. Not exactly a book for the ages but certainly worth reading.

This is an excellent book about the new global super rich, the elite of the elite, how they got there and their methods to stay there. Lots of interesting anecdotes and stories. While some readers may find the level of detail over-reaching, the completeness and soundness of the analyses are impressive.

I found this book an easy, and absorbing read. For me it was a real eyeopener into the lives, and salaries of the really affluent.

During the whole book the Author does not once address how we can solve the problem of income equality. Just talks about why it exists, never wanting to step out of line and say something against the Plutocrats because as a financial reporter that might affect her bottom line.

A complete waste of my time.