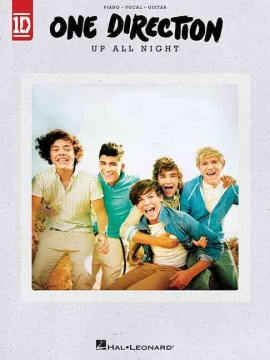 Up all night is one of the best albums one direction released back in 2011. One direction is a boy band group formed after finishing third in the X factor in 2010. They disbanded in 2016. Up all night was one of their most hit albums. The song what makes you beautiful is in that album, became a huge hit around the world. The music video of that song has over 1 billion views. All the songs in this album are a hit. You can’t help yourself from singing, and dancing along with the songs. My favourite songs in this album is what makes you beautiful, one thing, and stole my heart. I love all the songs in this album, but these are my favourite ones. If you haven’t checked them out already, please do it because they are really talented, and I can bet you will at least like one song from this album. @bluesky of the Teen Review Board at the Hamilton Public Library

this album is superb. love it. harry is great. more than this is a good song. the whole thing going on here is incredible. sad their b-sides are only available on the souvenir edition, which is not available at the library :( . i wish they would come backkkkkk.

They have such good style in music! My fave singers and always will be <3

They put the music video by them before called "What Makes You Beautiful" but not in a long time and it 's gotta be you they use to put it on too and one thing they use to put on t .v aswell but not in a long time. I have this CD now. I got it on friday May 19, 2017. My version is a book with 15 songs on the CD. I really like this CD by 1D but they sometimes put it on.

I love this cd I own one direction and the cd. and I hope I will meet them and marry harry and loui

I own this cd & I bought the deluxe edition songs on ITunes. This is an amazing cd. The songs go with puppy love (WMYB), uniqueness (One Thing), heartbreak (Tell Me A Lie) & want (Gotta Be You).
I really love this cd because knowing where the boys are now & going back to listen to these songs its like incredible.
They inspire me so much, knowing that they are just regular people you toke a risk & ending up coming on top is amazing.

I in Love with this album right now

maroon_fox_307 thinks this title is suitable for All Ages

brown_cockroach_19 thinks this title is suitable for 13 years and over

balkangirl101 thinks this title is suitable for All Ages

CrumpLover thinks this title is suitable for 3 years and under

Courtney4 thinks this title is suitable for All Ages

tamgreat2u65 thinks this title is suitable for All Ages

DO YOU GUYS KNOW LOGAN AND JAKE PAUL.I KNOW YOUR MOMMY AND SHE DOES NOT GO POTTY AT ALL.DID YOU KNOW SOME PEOPLE SAY THEY ARE FRESH MEAT

"I tried playing it cool,but when I'm looking at you, I cant ever be brave, 'cause you make my heart race"

"You're insecure, don't know what for"

Have you ever heard the song snow snow beautiful snow?
Why yes did you write that song?
No I shoveled it. Curly

Hey Josie it's too bad we don't have time to bury these fellows. The Buzzards' have to eat also, so do the warms. The outlaw José Wales

"I like the way you smile wit your eyes other guys see it but don't realize that is's my, my lovin'" - Niall Horan in Everything About You

theres only one thing and that is u

Definitely a Chick Music CD!!!!! For adolescent girl 14 and under!!!

One Directions' newest album that gained them fame around the world. It contains the hit "What makes you beautiful"

a group of english guys..who find their fame to stardom

The British-Irish boy band, One Direction, were formed on the X-Factor in 2010. They each auditioned as solo artists, but were later put into a group. In this group there was Liam Payne. Liam auditioned for the X-Factor before, but Simon told him to come back in 2 years. The rest of the group is Niall Horan, Harry Styles, Louis Tomlinson and Zayn Malik. Their debut album, Up All Night, has reached number 1 in over 10 different countries. All of the songs in the album are amaZAYN, brilLIAM, fabuLOUIS, extraordinHARRY, phenomiNIALL and 1Dferful!!!

Too bad this CD doesn't have Moments <3 That's my fav song by them.One Direction is hilarious and their singing is amazing :) Harry Styls,Liam Payne,Louis Tomlinson,Niall Horan and Zayn Malik :D

One Direction is a British-Irish boy band formed on the 2010 series of X-Factor. This is their ahmaZAYN, extremely succesful (debuted at #1 on billboard charts) album, "Up All Night". Band members are Niall Horan, Louis Tomlinson, Harry Styles, Zayn Malik, and Liam Payne <3 Girls everywhere are CRAZY for them, and you will be too, after listening to this CD!!!! :D