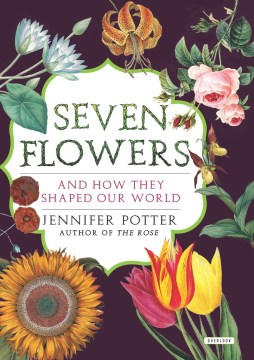 Seven Flowers and How They Shaped Our World

Penguin Putnam
But what is the nature of their power and how did it develop? Why have these particular plants become the focus of gardens, literature, art—even billion dollar industries? The answers to these questions and more are what drove journalist and author Jennifer Potter to write Seven Flowers. Drawing on sources both ancient and modern, and featuring lush full-color illustrations and gorgeous line art throughout, Potter examines our changing relationship with these potent plants and the effects they had on civilizations through the ages. The opium poppy, for example, returned to haunt its progenitors in the West, becoming the source of an enormously profitable drug trade in Asia. In the seventeenth century, the irrational exuberance of the Dutch for rare tulips led to a nationwide financial collapse. Potter also explores how different cultures came to view the same flowers in totally different lights. While Confucius saw virtue and modesty in his native orchids, the ancient Greeks saw only lust and sex. In the eye of each beholder, these are flowers of life and death; of purity and passion; of greed, envy and virtue; of hope and consolation; of the beauty that drives men wild. All seven demonstrate the enduring ability of flowers to speak metaphorically—if we could only decode what they have to say.

Baker & Taylor
Traces the histories of seven iconic flowers--including the rose, orchid, and opium poppy--to reveal the nature of their influence and rise to objects of billion-dollar industries.

Book News
Potter, who writes about the history and culture of plants, gardeners, and gardens, describes how lotuses, lilies, sunflowers, opium poppies, roses, tulips, and orchids shaped various societies in religious, spiritual, political, social, economic, aesthetic, or pharmacological ways. For instance, she relates how the opium poppy became a source for the drug trade in Asia, how the tulip led to a financial collapse in the Netherlands, the views of different cultures about the orchid, the lotus in ancient Egypt, and the power of the sunflower. Annotation ©2014 Ringgold, Inc., Portland, OR (protoview.com)

Baker
& Taylor
The author of Strange Blooms traces the histories of seven iconic flowers including the rose, orchid and opium poppy to reveal the nature of their influence and rise to objects of billion-dollar industries.

an unusual, also entertaining and informative, look at history. I particularly enjoyed the economic history going clear back to bce times