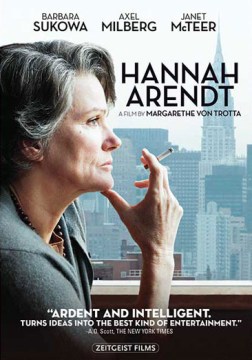 Very thought provoking film, on the trial of Adolf Eichman and the journalist Hannah Arendt, assigned to cover him for the New Yorker. Wonderful script, directing and actors.

This was a thoughtful film, and I found it a good primer in her thought to show my husband and parents so I wouldn't have to keep explaining my thesis to them

The film shows the four years life (1960-1963) of philosopher Hannah Arendt. Fifty years have passed and the world is the same.
Heidegger in the film as a 35-year-old is too old. It is understandable after watching the Making of.

Hannah Arendt in the glass booth. This film covers the writing of her most famed book, Eichmann In Jerusalem, and its furious aftermath. It seems to me she was often attacked on irrelevant personal grounds (she lacked feeling? would a man be attacked in that way?) by people who did not read or understand what she actually wrote (hello, internet), or had rage they saw fit to displace upon her (hello, internet, again). But what was the rage about? I'll leave the film to introduce those complex ideas, but after Arendt's book, we could not think about the Holocaust and human complicity with evil in the same way again. Unlike similar films about intellectuals, like Capote or A Beautiful Mind, the screenplay is minimalist, and there is little sentimentality. However, there are many subtly dramatic moments, and at least two show-stopping scenes: the inter-cutting of film with video from the actual trial, and the speech Arendt gives at the end, which had my heart in my mouth. The film's weak point is the presentation of opposing views; as shown here, there is no question that she was in the right. ETA: come to think of it, although you don't have to read the book to enjoy the movie, I strongly suggest reading it, either before or after. Ms. Arendt would appreciate your dedication to facts, not emotion.

There is a fundamental difference between seeking an understanding of evil and forgiving it. Forgiveness cannot, and in many cases should not, be granted. Trying to understand evil, however—its nature, causes and manifestations—is a necessary precondition to understanding the human condition. Seeking this knowledge requires intellectual rigor, honesty, integrity—and, above all, courage.

These are qualities which the seminal 20th century political theorist Hannah Arendt displayed throughout her lifetime and in all her work, but most of all in her coverage of the 1961 trial of SS-Obersturmbannführer Adolf Eichmann. Hannah Arendt (2013) is a thoughtful, nuanced, multi-layered depiction of Arendt’s coverage of the Eichmann trial and the personal price she paid for her courage and integrity.

A strong argument can be made that one cannot, and should not, form an opinion of Arendt or the events depicted without taking the time to read what she actually wrote (Eichmann in Jerusalem: A Report on the Banality of Evil, 1963; a true joy of a read).

The film is a masterful depiction of the complicated and brilliant human being who was Hannah Arendt: Her conflicted feelings concerning her identity as a Jew (some of which are shared by this reviewer); her affair and complicated relationship with German philosopher Martin Heidegger, a proud member of the Nazi party during the Third Reich; the quiet dignity and grace with which she bore both the suffering she endured in Germany and German-occupied France and the vitriolic hatred the honesty of her coverage of the Eichmann trial inspired in second-rate minds; and, above all, her passionate need to understand the greatest evil mankind has yet to experience.

Barbara Sukowa (without doubt one of the great actresses in the history of world cinema) delivers a subtle, nuanced, devastatingly candid performance as the complex, often contradictory, troubled genius who was Hannah Arendt. It is easy to suspend disbelief, and the viewer feels that (s)he is, in fact, watching Hannah Arendt live through the events depicted as they unfold. Janet McTeer delivers a truly memorable performance as the novelist Mary McCarthy, perhaps Arendt’s closest female friend and confidante. Axel Milberg’s Heinrich Blücher, Nicholas Woodeson’s William Shawn, Klaus Pohl’s Martin Heidegger—the film is replete with wonderful, multi-layered performances.

Caroline Champetier’s cinematography has an immediacy and intimacy startlingly, compellingly appropriate for the characters and events depicted. Margarethe von Trotta’s and Pamela Katz's screenplay is nothing short of brilliant: Every scene, every bit of dialog, every bit of business, even every establishing shot reveals the hand of deft cinematic writers who know exactly what to leave in and (every bit as important in film) exactly what to leave out.

Ms. von Trotta also directed the film. It’s rare that this reviewer has the opportunity to say this (and always a pleasure when I can): There aren’t enough superlatives to describe her truly extraordinary direction. The film depicts highly emotionally-charged events without once lapsing into sentimentality or high melodrama—or giving in to the dishonest, simplistic moral certitudes virtually every other film made about these events wallows in. Her use of actual footage of Eichmann at the trial, and her truly spectacular choices of what footage to use, succeed so much better at portraying the true mediocrity of the man and underlining Arendt’s conception of ‘the banality of evil’ than using an actor to portray Eichmann ever could.

Hannah Arendt is the most honest and nuanced depiction of Arendt’s coverage of the Eichmann trial this reviewer has seen to date. It accomplishes, in film, exactly what Arendt set out to do in print. It possesses the same honesty, integrity, guts, grit and genius Hannah Arendt did. It’s must-see viewing for anyone seeking to understand the nature of evil.

Brilliant, insightful, truly provocative examination of the woman who caused such a fire storm with her notion of the "banality of evil." Slow start but stick with it. It takes a while to mine the genius.

after hearing over the years of Arendt and her 'banality of evil' comment I was glad to be able to watch this bio film to gain a better understanding of both her and the article she wrote. heavily philosophical
very interesting in light of the current political upheaval around the world.

Good film. Tells the story of Hannah Arendt's publication of EICHMANN IN JERUSALEM in The New Yorker. She took a lot of criticism because she placed a portion of blame for the Shoah on European Jewish leadership who worked with the Nazis to deliver Jews to the camps. The movie also weaves in Arendt's love affair with Martin Heidegger, one of the giants of 20th century philosophy, who at least at the beginning of Third Reich was an apologist for Hitler. The viewer should come away with an appreciation of Arendt and a deeper understanding -- 21st century Americans in particular -- of the banality of evil.

Although largely misunderstood and misinterpreted, Hannah Arrendt's attempts to understand the evil behind the Holocaust using the philosophical method were groundbreaking. Heavy on dialogue, Margarethe von Trotta's piercing character study tries to shed some light on both the woman and her ideas. Lead Barbara Sukowa's passionate performance steals every scene and the screenplay by von Trotta and Pamela Katz is a near perfect blend of weighty discourse and raw emotion.

Philosophy must be an incredibly difficult thing to translate into film, so I give the filmmakers credit for bringing across Hannah Arendt's thinking, and that of her opponents, so clearly. I think more life could have been put into the fascinating subject of evil and Arendt's rationale, but it was a good effort. Original video, such as of Eichmann during his trial, was used extremely well, and helped give us insight into what Arendt saw that led her to her controversial conclusions. Images of the infamous Nazi war criminal, fussing endlessly over bureaucratic details and defending his actions as those of a loyal servant put her essay into context. It seemed as if the script writers felt obligated to offer her opponents equal time, at the expense of letting Arendt explain herself better. She is seen to defend her views clearly only once, during a presentation to students, and I find this a flaw in a movie which is supposed to be about Arendt. The movie is still worth seeing. At the very least, it is a good introduction to her most disputed work, and to ways of viewing the subject of evil itself.