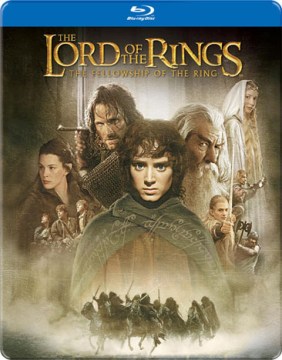 The Lord of the Rings

The Fellowship of the Ring

Wow, this is an amazing movie! I watched this movie when I was younger and found it was slightly boring, but I watched it again and it is now definitely my favourite movie! All of the actors are amazing, the plot is well done and the characters in the movie are also really well developed. The plot is set up really well and this movie is interesting the entire way through. It’s truly amazing how Tolkien was able to invent this amazing new world with new creatures.

The Lord of the Rings: The Fellowship of the Ring is an epic fantasy adventure film directed by Peter Jackson released in 2001. This film is based on the first volume of the same name of J.R.R Tolkien’s Lord of the Rings.

The film follows young hobbit, Frodo Baggins, who inherits a magic ring from his uncle. However, when Frodo discovers that this ring, is that of the Dark Lord Sauron, he is tasked with the quest of venturing through the world of Middle-Earth to Mount Doom, where the ring must be destroyed to stop Lord Sauron’s evil dominion. Though it may seem hopeless for Frodo, he is accompanied by several heroes to aide him in his quest, including other hobbits, an elf, a dwarf, men, and a wizard. Along the way, Frodo learns that, though it may seem impossible, there is always hope.

The Lord of the Rings: The Fellowship of the Ring is often called not only one of the best movies of the century, but possibly of all time. Ever since its release almost 20 years ago, the film has garnered high acclaim from both critics and fans alike and is often called a landmark in filmmaking and credited with the birth of the modern fantasy film genre. I agree with all of this and will be explaining why I believe this to be so.

First, this film is a perfect adaptation of the source material. A good movie adaptation keeps the main story line intact, including the characters, world and themes, while improving on aspects that did not work. Fellowship of the Ring does all this in spades, and in my opinion is the best adaptation in the trilogy. The movie keeps the core story of the book, and brings amazingly to the big screen, elements that were already perfected. Such as J.R.R Tolkien’s massive and detailed Middle-Earth, complex and interesting characters, and most importantly in my opinion, it adapts the major themes of the book such as, the sacrifices needed to maintain good, the dangers of having too much power, and that even in the darkest of times and places, there is always hope. Now, while it is incredible how well it translated the elements of the book that were already perfected, in my opinion, it is even more incredible how well it translated the aspects of the book that did not work. One of the main characters, Aragorn, who would have been a lot of trouble adapting to the big screen, is changed for the better. My favorite character from the entire movie, Boromir, had a very different story in the book. In Tolkien’s book, Boromir got little development over the course of the story, making his character way less impactful and memorable. In the film, Boromir has a completely fixed arc that becomes, in my opinion, one of the highlights of the movie. Finally, in terms of adaptation, in pretty much all large book to movie translations, certain things need to be cut, and this film is no exception. However, all the big changes from the source material here make sense and in many ways are better than the book. From cutting certain characters and replacing them with others, to reducing the length of certain events for a better pace, all the changes here make sense and feel fully realized. This film was able to do something the series author, J.R.R Tolkien, said was impossible, adapt Lord of the Rings to the big screen.

#1 in the trilogy to watch

Good film! Lives up to one of the best fantasy movies ever made!

Epic film that never gets old.

The movie kind of made up its own story. I wish it was more true to the novel.

A great franchise! But not for kids.
At least 11 and up

The Fellowship of the Ring is a timeless classic, in which J.R.R. Tolkien essentially created a new genre. He created an incredible world full of magic and a real political landscape, and was able to invent new creatures and cultures. He created the modern genre of fantasy with this book. Any references to elves, or orcs, or trolls, or anything of the like can most likely be traced back to this book. The book is an incredible story about destroying an influencing item of power, that corrupts and damages anyone who is near it. The story is so classic and I believe everyone should read it once in their life. 5/5 @ecozones of the Teen Review Board of the Hamilton Public Library

The Lord of the Rings trilogy are awesome. Back then, I didn't really pay attention to the storyline and was most fascinated with only the actions scenes. But watching it many years later I was amazed at how good the movie is, aside from the fight scenes of course. All three films are so awesome that when "The Hobbit" came out I watched it too. I wish to one day hear news about The Lord of the Rings being made again, just like the Star Wars series.

The best fantasy movie ever created!
Peter Jackson has crafted lush, dense, authentic, magnificent videos
of each book of the Lord of the Rings trilogy,
true to both the spirit and details of Tolkien’s monumental text.
The Hobbit, prequel to the saga,
became a pointless clownish cartoon under Jackson’s direction,
but the LOTR series is a triumph in every sense.

Frodo: I wish the ring had never come to me. I wish none of this had happened.

Gandalf: So do all who live to see such times. But that is not for them to decide. All we have to decide is what to do with the time that is given to us. There are other forces at work in this world Frodo, besides the will of evil. Bilbo was meant to find the Ring. In which case, you were also meant to have it. And that is an encouraging thought.

"A wizard is never late, Frodo Baggins. Nor is he early! He arrives precisely when he intends to."

Gandalf " You shall not pass!"

Gimli: "The Fellowship has failed."
Aragorn: "Not so long as we stay true to each other."

Gandalf: You Cannot Pass! I am a servant of the Secret Fire, wielder of the Flame of Anor. The dark fire will not avail you, Flame of Udun! Go back to the shadow. You Shall Not Pass!

"You have been chosen, and you must therefore use such strength and heart and wits as you have."

GALADRIEL: Rumour grew of a shadow in the East, whispers of a nameless fear and the ring of power perceived its time had now come. It abandoned Gollum. But something happened then the ring did not intend. It was picked up by the most unlikely creature imaginable: a Hobbit, Bilbo Baggins of the Shire. For the times will soon come when Hobbits will shape the fortunes of all...

FriendsDragonsCats44 thinks this title is suitable for 13 years and over

black_eagle_622 thinks this title is suitable for 11 years and over

violet_cat_5387 thinks this title is suitable for 13 years and over

ANABELLE H. PORTER thinks this title is suitable for 10 years and over

cherrypanda thinks this title is suitable for 9 years and over

Tamuril2341 thinks this title is suitable for 10 years and over

selenium_toad_0 thinks this title is suitable for 8 years and over

blue_fox_453 thinks this title is suitable for 8 years and over

readfox thinks this title is suitable for 7 years and over

Frightening or Intense Scenes: When a man is affected by the ring, he becomes irrational and gets somewhat scary, shouting and grabbing other characters.

Frightening or Intense Scenes: The parts when there is war...head get cuts off...blood. There is also some witches.

Violence: some violence, nothing too much

Frightening or Intense Scenes: little children might get a bit scared in some parts, but that's it.

Violence: Violence is really not that bad, compared to modern day movies. Also not violent compared to the second and third movies.

Frightening or Intense Scenes: Orcs are frightening, as well as the ring wrathes, which really creeped me out when i watched it. Don't let children under 10 watch it. some images are unpleasant and may cause nightmares for children and some older people.

Frightening or Intense Scenes: When I first saw this film the orcs frightened me. They are very gross and there are many disturbing images of the orcs being killed.

Violence: A little violent compared to the films now a days.

In a small village in the Shire a young Hobbit named Frodo has been entrusted with an ancient Ring. Now he must embark on an Epic quest to the Cracks of Doom in order to destroy it.