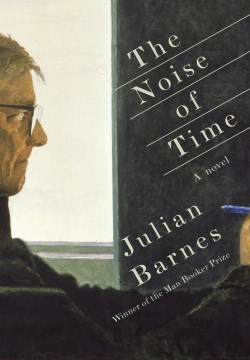 The Noise of Time

In May 1937 a man in his early thirties waits by the lift of a Leningrad apartment block. He waits all through the night, expecting to be taken away to the Big House. Any celebrity he has known in the previous decade is no use to him now. And few who are taken to the Big House ever return.
Publisher: Toronto : Random House Canada, c2016
ISBN: 9780345816573
Branch Call Number: BAR
Characteristics: xi, 201 p. ; 20 cm

Interesting biographical novel about the life of composer Shostakovitch and the ruinous effects of totalitarianism on art, told in flashbacks and stark but strangely beautiful prose. Makes me want to listen to the music again.

A well written concise book about the ruinous effects of totalitarianism on art and artists.

Writing style (in third person about himself) makes it difficult to connect. But the terror of being an artiste in Stalin's Russia is well depicted. And it is fun to go to Spotify and listen to his music while reading the book.

Simply brilliant in its observations on the atmosphere,
music, politics, and tremendous stresses of the time.
Another masterpiece by Barnes.

Quiet but profound. A portrait of a great artist tormented by his appeasement of Stalin. Although very much an historical novel, "Noise of Time" has universalized themes including the nature of bravery and cowardice.

I must confess that it took me some time to work out that the subject of this small novella is Dimitri Shostavkovich.

This book is written in this quiet manner, in the third person, in a somewhat stilted language that only barely masks rage and frustration. The sentences are brief, as are the paragraphs, and the three sections of the book are broken up into asterisked sections. For a book about a composer, there was little music: instead there were words, muttered and issued through clenched teeth.

After I belatedly realized that "he" was an actual figure, Shostakovich, I wondered if, in this information-rich world I should go off and google him before I proceeded. I didn't, but I do wonder if I might have got more from the book if I had done so.

Instead, because of my ignorance of the real-life historical figure and his biography, I almost had to read the book as an allegory. As such, then, its brevity was a real strength. I don't really now if I would have wanted it to go on for much longer.

For my full review, go to
https://residentjudge.wordpress.com/2016/12/29/the-noise-of-time-by-julian-barnes/

This novel about the famous and controversial figure of Dm. Shostakovich is probably the best book written by a non-Russian about the Russian composer and the life in the former Soviet Union that I have ever read!

Readers will feel Shostakovich’s anguish at his peril, always one mistake away from Stalin’s machinations and later Khrushchev’s cunning. Barnes has written beautifully about art and an artist under the thumb of a repressive regime, while showing us how this composer managed to survive and thrive. Who knows what of his music might have been even more brilliant in a free society.

Well written, but I wonder why the author chose this subject; surely not to expound on the meaning of "irony." For those interested in Soviet Russia, this book will appeal to the "tea and sandwich" crowd, but for those who prefer "vodka and pierogis," I suggest Svetlana Aleksievich.

What I derived from this book; the despotic rule of Russian leaders that leads even good people to denounce anyone who is not favored by government. Be a hero and die or live as a coward and 'survive' to live a kind of death.

In the world’s younger days, when magic and religion held sway, it was plausible that monsters might have consciences. Not anymore. The world had moved on, become more scientific, more practical…and tyrants had moved on as well. Perhaps conscience no longer had an evolutionary function, and so had been bred out. Penetrate beneath the modern tyrant’s skin, go down layer after layer, and you will find that the texture does not change, that granite encloses more granite; and there is no cave of conscience to be found.

They always came for you in the middle of the night. And so, rather than be dragged from the apartment in his pyjamas, or forced to dress in front of some contemptuously impassive NKVD man, he would go to bed fully clothed, lying on top of the blankets, a small case already packed on the floor beside him. He barely slept, and lay there imagining the worst things a man could imagine. His restlessness in turn prevented Nita from sleeping. Each would lie there, pretending; also, pretending not to hear and smell the other's terror. One of his persistent waking nightmares was that the NKVD would seize Galya and pack her off—if she was lucky—to a special orphanage for children of enemies of the state. Where she would be given a new name and a new character; where she would be turned into a model Soviet citizen, a little sunflower lifting her face towards the great sun that called itself Stalin.