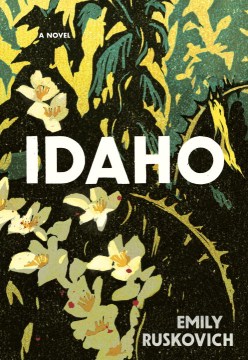 A tale told from multiple perspectives traces the complicated relationship between Ann and Wade on a rugged landscape and how they came together in the aftermath of his first wife's imprisonment for a violent murder.
Publisher: New York : Random House, [2017]
Edition: First edition
ISBN: 9780812994049
0812994043

Some content below may have been reported by users for containing spoilers or offensive content. Learn More

I can't remember the last time I was so frustrated with a book and still continued to read it. I should have read the reviews before continuing. I stuck it out to the bitter end because the story line kept me interested enough to want to know motivation and outcome, neither of which was revealed for so many questions. In the interview with the author she suggests that her objective was to be true to life in that in cases like she laid out we really don't truly get to know these things. I still didn't find it gratifying.

This is a beautifully written novel about memory and imagination, as a woman tries to reconstruct and understand an inexplicable event. It is told from changing perspectives and changing timelines.

Just could not get into the book at all. Seemed it was all over the place and hard to follow. I tried it three times and gave up.

What this writer does best is establish a mood within a place. Her descriptions of Idaho, the people, the passions, the quirks, clearly come from a place of her personal knowing. She captures the place and the people, and weaves them into the story very skillfully. Her descriptions of the children at play together are very real. The passages that describe music are wonderful. Her writing is beautiful, moody, evocative. The unique plot, centering around the murder of an innocent child, is very unusual, inviting the reader to examine family relationships, forgiveness, our histories, the land and its meaning in our lives. The book skips around in time, making it seem that we are seeing the story through the eyes of different characters, at different times, almost like pieces of memory, similar to the dementia experienced by one of the main characters. This book, winner of the Dublin Literary Prize, is well worth the read. Ruskovich is an author worth watching.

Winner of the IMPAC Dublin Literary Award 2019.
An absolutely beautiful rendering of two very difficult subjects - a brutal murder, and the loss of memory. Ruskovich's tender, lilting treatment drifts through the book like mist set to music.

This book left so many unanswered questions. Why did the mother kill her daughter. What happened to the daughter that was left at the murder scene. What about the couple who never had any children. What did that have to do with anything. I kept reading thinking eventually the questions would be answered, but they never were. A good read but as others said unsatisfied over all.

I agree with everything readers have said: from why did June do it, what's the story of Eliot all about, to beautifully written. I found the flipping back and forth in time annoying toward the end - way too mysterious for the kind of read that this novel held in potential. I always feel bad for the writer and as a close reader when I start glazing over the prose to find the next reason to keep on reading.

I hope Emily will keep writing beautiful books but also hope that the next one has more of the why of plot and characterization included.

Wade and Jenny live on a backcountry Idaho farm with daughters June and May, seemingly happy until a tragic summer day when May is killed and June disappears. The intense sadness of these losses permeate the story, one almost too hard to read except for the author’s incredibly lyrical writing. That the publishers classified the book as a ‘mystery’ or ‘thriller’ is a disservice. What were they thinking? There is no strong linear plot that tracks a killer or a girl on the run. This is strong psychological and very literary fiction. No wonder the varying reviews. The book is an ambitious debut novel set in a beautiful place in the West; it tells haunting stories of love and remembrance about which one won’t soon stop thinking. One of the author’s literary heroes is esteemed Alice Munro. There were hints of her kind of stories in this book and that’s a good thing!

p. 253 Music "That original song hovers over her, barely upheld. But breaking through these terrible chords, the high intervals of the right hand trip over the rocks in streams, recover themselves, and struggle, running in a breathless scale, up."
p. 259 "Downstairs , her father practices the piano. The earthquake chords, the pedal tones, the fingertips, again. The words her father never gets to because his giant hands can't make it there. His hands are climbing up a mountain in the music. They are dragging his stumbling voice along, over the boulders loose in the dirt. His hands are slipping down, then reaching up, pulling at the branches and the long, tough weeds."

p. 144 Disgust "Such a request, when May had known already to keep it secret, aged her a little. She became aware of somethng deep inside of herself, trapped underneath her ordinary love, stale and pungent and faintly sweet and quickly disappearing, like the opening of a forgotten jar inside of which a pet grasshopper has days ago died among its wilted grasses. Disgust: It is a feeling older than she is."
p. 196 "Ann feels relief, yes, but she is also shocked. She knows from the casual gestures, from the simplicity of his smile, the absence of pain, that she has inherited his family wholly now, that nothing can bring them back. For the first time ever, she knows for certain that they live only in her."

p. 64 cont'd " rightful - border, and those trees and rocks become something other than themselves, a history that is the history of the people who claim them; the dark trees are exclusive, conspiratorial....this land they're all so proud of is worthless. Steep, parched, dusty, and susceptible to fire in the summers, and the summers a reprieve from the winters that define these mountains."
p. 116 "Outside the coyotes' howls bore tunnels through the frozen silence. The ravens in the trees anticipate the spring, when they will nudge their weakest from their nests, this act already in their hearts as if already committed. The garter snakes, deep in the ground, hibernate alert. Bodies cold, unmoving; minds twitching, hot. So many secret, coiled wills, a million centers spiraling out, colliding into a clap of silence that is this very moment in the house, this beautiful oblivion in which they love each other."

"...flies rise again and buzz and bounce...as the dense yellow light through the widow penetrates the fractured panels of their wings and warms them in these moments when everything is safe." p. 13
p. 22 "Ann imagined the old spotted horses chomping their hay nearby. The hornets in the corners buzzed, and outside somewhere, under the clothesline where rose-colored shirts were starched with sunshine, two girls were filling miniature blue teacups with sand."
p. 25 "...she felt that those three forgotten years in Idaho had settled deep inside of her and unsettled all those beautiful years that followed. Idaho was the mine and England the unsteady surface of her life."
p. 64 "Acres and acres of land, and yet entire lives are spent within a twenty-foot radius around some trailer. But ownership reaches out from the filthy beds, where bodies are sleeping in the flickers of afternoon TV; it reaches out, a sweeping arm, across every tree and rock contained within its legal - and nevertheless