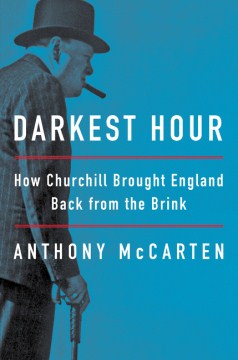 How Churchill Brought England Back From the Brink

Baker & Taylor
Presents an account of the period immediately following Winston Churchill's ascendancy to Prime Minister and how he met the challenges of the Blitzkrieg.

From the acclaimed novelist and screenwriter of The Theory of Everything comes a&#160;revelatory look at the period immediately following Winston Churchill&;s ascendancy to Prime Minister.

&;He was speaking to the nation, the world, and indeed to history...&;

&#160;May, 1940. Britain is at war. The horrors of blitzkrieg have seen one western European democracy after another fall in rapid succession to Nazi boot and shell. Invasion seems mere hours away.

&#160;Just days after becoming Prime Minister, Winston Churchill must deal with this horror&;as well as a skeptical King, a party plotting against him, and an unprepared public. Pen in hand and typist-secretary at the ready, how could he change the mood and shore up the will of a nervous people?

&#160;In this gripping day-by-day, often hour-by-hour account of how an often uncertain Churchill turned Britain around, the celebrated Bafta-winning writer Anthony McCarten exposes sides of the great man never seen before. He reveals how he practiced and re-wrote his key speeches, from &;Blood, toil, tears and sweat&; to &;We shall fight on the beaches&;; his consideration of a peace treaty with Nazi Germany, and his underappreciated role in the Dunkirk evacuation; and, above all, how 25 days helped make one man an icon.

&#160;Using new archive material, McCarten reveals the crucial behind-the-scenes moments that changed the course of history. It&;s a scarier&;and more human&;story than has ever been told.

&#160;&;McCarten's pulse-pounding narrative transports the reader to those springtime weeks in 1940 when the fate of the world rested on the shoulders of Winston Churchill.&#160;A true story thrillingly told. Thoroughly researched and compulsively readable.&;&;Michael F. Bishop, Executive Director of the International Churchill Society

Baker
& Taylor
The author and screenwriter of The Theory of Everything presents an account of the period immediately following Winston Churchill's ascendancy to prime minister and how he met the challenges of the Blitzkrieg.

A very interesting recounting of Chrurchill's first days of government as Prime Minister. The premise is that he considered a peace settlement with the Nazi's. This is in contrast with many other historians. Worth the read.

Churchhill with all his faults was definitely the right man at the right time to lead Britain out of the Nazi mess. That country was dangerously close to asking for a peace treaty with the Axis powers very early into the war.

I believe to save over 200 thousand troops from Dunkirk was divine intervention from the Lord working.

I wish that all Canadians read this book (or watch the movie) and make a quality comparison with the leaders they elect to office nowadays!