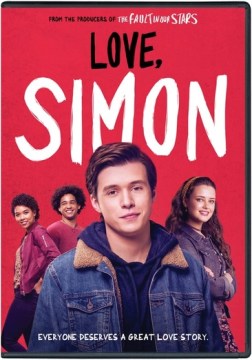 Everyone deserves a great love story, but for seventeen-year-old Simon Spier, it's a little more complicated. He hasn't told his family or friends that he's gay, and he doesn't know the identity of the anonymous classmate that he's fallen for online. Resolving both issues proves hilarious, terrif... Read More »

A cute, sweet, and excellent adaptation of Becky Albertalli's YA novel, Simon vs. The Homo Sapiens Agenda! This movie does a great job of bringing Simon's story to life. It's a heartfelt story about a queer teen coming to terms with his sexuality and trying to come out, but it's also a really adorable love story between two teen boys.

My favorite thing about both the book and movie is that they both touch on how scary and traumatic it can be to come out, even if you do have supportive friends & family.

My only complaints? (1) I would have loved to see the lead role go to an actually queer actor, though Nick Robinson does a great job nonetheless. (2) Leah is a canonically fat character and I was disappointed that this part of her character was erased in favor of a straight-sized actress.

A fresh and entertaining take on love in the age of the cell phone zombies; I liked it a lot.

I loved this movie. The actor who played Simon did a fantastic job. The storyline was good and it kept me interested throughout entire movie. Highly recommend.

The movie Love, Simon was pretty good. I watched the movie without ever getting bored, but I felt as if the storyline was very predictable. For example, from the first 10-15 minutes of the movie, I correctly predicted the entire storyline, which kind of ruined the movie experience for me. Simon, played by Nick Robinson, was a very good actor in the film. However, I found his close friend in the movie, Leah Burke (who was played by Katherine Langford), quite annoying! It was hard to watch her scenes because I found her character very pushy and snobby! Overall, I did enjoy this movie because I liked the overall story - it was interesting to see how Simon’s sexuality impacted the relationships with his family and friends. Overall, I would rate this movie a ⅘
@Montgomery of The Hamilton Public Library's Teen Review Board

I love Becky Albertelli's writing so much and so Simon vs the Homo Sapiens Agenda (title of the book and far better than that of the movie) was placed closed to my heart when I started watching. I have always felt like the characters and I would be best friends and I love all of the author's references to Harry Potter and Hamilton, so I was anxious to see how it was done in a movie, as I have had my heart broken by book to movie adaptations before. Because I read the book first, I was unable to watch the movie without comparing it to the original, so be forewarned that the book has influenced my opinions.
The two biggest problems I had weren't a big deal really: his sister was done completely differently and about six years younger seeming and the fact that originally Leah actually was in love with Nick for the duration of the book, not Simon, and I found it a bit odd that they changed those things.
Overall, I loved the rest of the movie. I felt all the actors did an amazing job bringing the book characters to life on screen, especially Nick Robinson, who played Simon. He was literal perfection, which made me so happy, because characters are always the most important part of the book for me, so it was wonderful to see them so well done. The ending was so sweet and beautiful and I went away floating. Oh, and I cried, which I had totally not expected to do! And they managed to find ways to weave the pop culture references in! Hamilton playbill pinned on his wall, anyone?

This wasn't the best movie I've ever seen but it was a lot better than I expected. The actor who played Simon was amazing and by far the best of the bunch. The storyline was great and not "judgemental" or "preachy" and approached the subject in a nice way. Definitely recommended!

A decent after school special about growing up and finding out who you truly are. This movie is about a boy finally coming out of the closet. It touches on the negativity of keeping certain secrets and how it affects more than just the person. The acting was very good and the director did a decent job. You can compare this movie with some of the Christian value movies the library carries as well as those hallmark movies. This is a movie a family could watch together but I feel it would appeal to the younger crowd.

I LOVED the book this movie is based on, and I thought the movie was just a delight to watch. It's a fun peek at high school life as a group of friends find love and make choices... and at the center of this is Simon's decision to finally "come out". Definitely some contrasts between the novel and this film; definitely funny and heartwarming; and I liked both, but I recommend the book just a little bit more.

Of course, some things in the book had to be changed to make it more "dramatic" and to make clear what is going on in Simon's mind. Also, the pop culture references certainly needed modification since those in the book are obscure (to say the least).

That fairground/Ferris wheel sequence, though, is absolutely over-the-top Hollywood!!

Not as good as the book, but still very well done.

michelelevine thinks this title is suitable for 12 years and over

Monica_Diana_Czekirda thinks this title is suitable for 14 years and over

18 year old who is fighting for a girl he loves they laughed did you fether you hear no she said i said what is he doing a guy smiling at his sandwitch when a guy says he has to call his mom she doesn't improve anyone in the house i laughed they when he said Martin i think he 's Ricky Martin i didn't evan notied that was Simon dressed in white in teatheres and now .they laughed that he thought he was Jeuse i didn't know she was subpose to be Wonder women they laughed how his balls fell i didn't notied it was martin and they said nextfex i have it and they laughed that Drake played out and thats he 's not a rap guy and that she likes Beyonce lemand they laughed that he looks like a drug queen rolled round a megnetle poarty and they played feel it still a guy that invited them to the party said he is Brock obma hopw that dounled trump doesn't destry my legacy they laughed they laughed he sang no by Megan Tranior they had that song in track and filed 2016 they laughed that she black love black wemon not like a have a thing for black women they laughed now what things are the rights rats acully the wrong parts they laughed he was sleeping my brother said i hear monster mash i didn't hear untill now they laughed when he pucked on Simon they laughed they dicked the barf bag to morning untill it's funny how he chocks my brother knew he will say shit my brother laughed simon said go to hell in teathers i said Waffle house everyone laughed that he stood and said Abby is a super dame super hero and made her say it in frount of the whole dinner when he said doug thought it was pot everyone laughed and he said must be Friday but we watched it Monday and it remines me of st jhons how they have green clothes cheerleaders