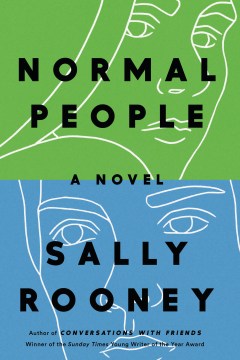 Connell and Marianne grow up in the same small town in rural Ireland. The similarities end there; they are from very different worlds. When they both earn places at Trinity College in Dublin, a connection that has grown between them lasts long into the following years. This is an exquisite love story about how a person can change another person's life -- a simple yet profound realisation that unfolds beautifully over the course of the novel. It tells us how difficult it is to talk about how we feel and it tells us -- blazingly -- about cycles of domination, legitimacy and privilege.
Publisher: Toronto : Alfred A. Knopf Canada, 2019
Copyright Date: 2018
ISBN: 9780735276475
Branch Call Number: ROO
Characteristics: 273 pages ; 22 cm

Connell and Marianne grow up in the same small town in rural Ireland. The similarities end there; they are from very different worlds. When they both earn places at Trinity College in Dublin, a connection that has grown between them lasts long into the following years.

Ok, what? I’m honestly surprised I liked this book so much. It’s definitely not my thing, it being so very relationship-y and angsty with nothing else really going on. But because of the deafening buzz at the time of publication, it's been on my to-read list for a while. Then the show aired (buzz, buzz, buzz), so when I saw the available audiobook on NC Digital Library, I went for it. AND... I really, really liked it. Or maybe even loved? I don’t know; I’m admittedly still confused. Getting to know these characters was oddly enjoyable, and I found myself routing for their coupledom even when it might not have been the best thing. But maybe that’s the appeal- life can be complicated and messy, and a lot of the time, what we want is not best and yet… Anyways, not sure I’ve read a book where the characters’ thoughts are so centered, and I’m finding it difficult to climb out of their heads. I think that says something.

This took me awhile to finish because the emotions it stirred up at times was hard to handle. I felt like I’ve been there with Connell and Marianne in their roller coaster ride to find themselves and their a sense of belonging. It also reminded me of all the feelings and experiences I’ve been through. Sometimes it feels a little too close to home. Their relationship with each other as well as with others are heartbreaking. This is what real life is about and not everything is happy and cozy. There are good times and then there are really bad times.

I wish I hadn't read this book. It is extremely depressing. A woman who continually turns away from a somewhat decent guy and chooses sick, abusive men. I couldn't sleep one night, it upset me to that degree. No thanks. At this point in life, I've heard and read enough negativity. It's time to stop wallowing in depravity, move away from unhealthy things.

Normal People is a quick and captivating novel that teaches the reader about the power of relationships, and how they can be used to transform people in a number of ways. Marianne and Connell grew up in the same town, practically unacquainted, until one fateful conversation changes how they look at one another. The novel takes us from the first conversation to years later, detailing how the two always seem to find their way back to each other. Although a quick read, the book does not lack originality, deepness, or insight into the lives of the protagonists. An important message taken away from Rooney’s novel was the idea of worthiness and love. Marianne finds herself unworthy of love, outcast, and abnormal. Connell is at his lowest point when he is not with those who make him feel cared for. The two search for their idea of love in a number of different ways while the novel teaches us about seeking support and healthy relationships. As cheesy as it sounds, the novel ensures the reader, as well as Connell and Marianne, that they are deserving of love, and that it is something fundamental to the human experience (in a number of different ways). Although short, Normal People doesn't shy from connecting with the readers and sharing a number of different messages about life and love. ⅘ stars, only for the abruptness of the ending!
@readingmouse of the Hamilton Public Library's Teen Review Board

Unassailable, at least in my bookclub.

Normal People is a story of two people who are both damaged and affected by their life experiences in such unique ways that only the other can understand. It is a modern love story filled with heartbreak, the challenges of life, and character growth. We see Marianne and Connell fall in love and leave each other repeatedly, and the way they continually come back to one another. It is a story with so many layers and beautiful writing that shows how young love can have a lasting impact on the rest of your life.

I found this book disappointing and uncomfortable to read. It started out with great promise, but really seemed to bog down once the protagonists went to college. I suppose it is realistic in a gritty, icky way; but it certainly is not what I would call entertainment nor uplifting. Many times I wanted to stop reading. I really cannot recommend it. I also agree w a previous comment--would have preferred quotation marks.

I personally had a very difficult time with not having any quotation marks- I know its a style and a choice of the author but for me it took awhile to get used to. Additionally, I was not fond of either of the main characters- to me they did not have redeeming qualities.

I liked that the relationship felt real and raw, which is hard to come by- however, I just did not care about either character to be invested or enjoy the story that was told.

I found this book very modern and relatable, I was not surprised to see the author is my age.
Sometimes I hated the way the characters were acting and yet I could see myself acting the same way and making the same decisions, saying similar things.

This is by no means a 'fun' 'light' love story, and I appreciate that it delves into the insecurities, blurriness of current relationships. Both characters have their own mental health issues and we see how that comes into play throughout their relationship and friendship.

I would recommend if you want a deep, though provoking love story, but not the warm and fuzzies.

I’m just nervous, he says. I feel like it’s pretty obvious I don’t want you to leave.

In a tiny voice she says: I don’t find it obvious what you want.

If people appeared to behave pointlessly in grief, it was only because human life was pointless, and this was the truth that grief revealed.

Cruelty does not only hurt the victim, but the perpetrator also, and maybe more deeply and more permanently. You learn nothing very profound about yourself simply by being bullied; but by bullying someone else you learn something you can never forget.

Marianne had a wildness that got into him for a while and made him feel that he was like her, that they had the same unnameable spiritual injury, and that neither of them could ever fit into the world. But he was never damaged like she was. She just made him feel that way.

There’s something frightening about her, some huge emptiness in the pit of her being. It’s like waiting for a lift to arrive and when the doors open nothing is there, just the terrible dark emptiness of the elevator shaft, on and on forever. She’s missing some primal instinct, self-defense or self-preservation, which makes other human beings comprehensible. You lean in expecting resistance, and everything just falls away in front of you.

He makes a facial expression she can't interpret, kind of raising his eyebrows, or frowning. When they get back to his house the windows are all dark and Lorraine is in bed. In Connell's room he and Marianne lie down together whispering. He tells her she's beautiful. pg. 45

kaitoryn thinks this title is suitable for 17 years and over

CORI D. MORRIS thinks this title is suitable for 18 years and over

J_257 thinks this title is suitable for 18 years and over

Don't remember much. Review: Marianne and Connell attend the same secondary school in Carricklea, a small town in Sligo, Ireland. The popular Connell, captain of the football team and a promising scholar, is the son of a single mother who cleans house for Marianne's mother. Marianne, bullied by her financially well-off family, occupies the lowest rung of the school's social ladder but outshines all of her peers academically. Though they avoid each other in public, Marianne and Connell share an intense emotional bond reinforced by secrecy and sex. .......

Connell and Marianne attend the same high school in small town, present day
Ireland. On the surface they have nothing in common and probably wouldn't
have crossed paths outside school had it not been for the fact that
Connell's mother cleans house for Marianne's mother and Connell waits at the
house to take his mother home every day. So begins a friendship that is kept
hidden from their school friends because at school Connell is one of the
popular and confident kids, and Marianne is considered an awkward oddity,
having no friends, but really not caring either. Connell is embarrassed to
be seen at school with Marianne and Marianne seems to accept that they
shouldn't acknowledge each other.

Skip ahead a year, and the two are at university in Dublin. Marianne has
found her confidence and is popular and outgoing, while Connell can only
stand looking on from the sidelines uncertain with what to do with his life.
Despite the changes in their circumstances they are each supportive of the
other, and through numerous personal, sometimes destructive relationships,
they always eventually gravitate towards one another.

Normal People could be called a coming of age novel and the central
characters are young people, but it isn't necessarily a young adult novel. I
don't think Rooney is aiming to write for any particular generation because
what Connell and Marianne go through is applicable to most of us whatever
our ages. It's not quite a romance either, but it is a love story. It almost
defies categorization. Ultimately I think it's a novel about integrity and
doing the right thing for the person you love, all the while knowing that
your own life will likely be changed and diminished. It's a novel about pure
love, love that is capable of overcoming everything, including shame and
guilt.
Nominated for the Booker prize, Sally Rooney's writing is beautiful, and
each new chapter is a snapshot in the lives of two flawed but hopeful young
people.