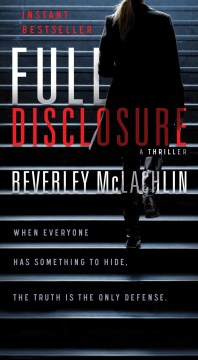 "There's nothing Jilly Truitt likes more than winning a case, especially against her former mentor, prosecutor Cy Kenge. Jilly has her own baggage, the residue of a dark time in a series of foster homes, but that's in the past. Now she's building her own criminal defense firm and making a name for herself as a feisty, tough-as-nails lawyer willing to take risks in the courtroom. When the affluent and enigmatic Vincent Trussardi is accused of his wife Laura's murder, Jilly agrees to defend him, despite predictions that the case is a sure loser and warnings from those close to her to stay away from the Trussardi family. Determined to prove everyone wrong, Jilly investigates Laura's death, hoping to discover a shred of evidence that might give the jury a reasonable doubt. But she is confronted by damning evidence and uncooperative witnesses at every turn. Someone isn't telling the truth, but whom? With her reputation and Vincent's life on the line, Jilly tries to unravel the web of secrets surrounding Laura's murder. But every answer leads to another mystery, and as Jilly digs deeper, she uncovers a startling revelation that will change not only the case, but her life forever."-- Provided by publisher.
Publisher: Toronto, Ontario : Simon & Schuster Canada, 2019
Copyright Date: 2018
ISBN: 9781501172793
Branch Call Number: MCL
Characteristics: 394 pages ; 20 cm

I was diaappointed to read that a ghost writer was nvolved - isn't that cheating? I know that the author can afford to hire a ghost writer. There is als suspension of disbelief in the fact that the lawyer and Mike have been dating each other for ten-plus years. This would never happen in real life!

I thoroughly enjoyed this first novel by our retired Chief Justice of Canada. (I enjoyed her autobiography as well.) Nice to read something well written, and with a knowledgeable law office and courtroom background instead of a "whodunit". I'd love to think this might be the first in a series.
Carole Cressman

I have to agree with Rodraglin's comments. This book is overwritten and overwrought. And the fact that there was a ghost writer involved somehow makes it even worse.

Beverley McLachlin had a great career as a jurist. While she may have written outstanding legal opinions and rulings, she has written one clunker of a book. I feel embarrassed for her.

But for her name recognition, I doubt that Simon and Schuster would have picked it from the piles of manuscripts submitted by aspiring authors, let alone published it.

I found this book very contrived. The plot's twists and turns were unlikely to happen in the real world, and the characters were poorly developed. They revolved only around the plot, there was no real depth to them. I kept going to the end, but felt it was not worth the time it took to read.

If only the ending was as good as the rest of the book. The writing was enjoyable and skilled but the plot is only adequate with the male characters mostly there to support the main female character’s ups and downs. Why only two stars? The ending was wholly disappointing which in this genre should be the peak narrative drive leading the reader to think “I didn’t see that coming” rather than a “you’ve got to be kidding” which happened here.

Bravo. This is a first rate novel by the former chief justice of Canada. Well done. One of those mysteries you just can't put down. Margaret Atwood take note.

Despite the sterling career of the author, this book does not rate much above good chick-lit.
The female lawyer is mercurial. The head of police is a bully. The boyfriend has to go and find himself and the law is an ass. I hope McLaughlin's second novel offers more depth in her characters and more complexity in the legal cases she is reflecting in her writing.

Jilly Truitt is a young, ambitious criminal lawyer making a name for herself.

When a wealthy businessman, Vincent Trussardi is accused of murdering his young wife, he reaches out to Truitt to defend him. This will be a high profile case with a significant retainer and Jilly is eager to take it on even though the evidence overwhelmingly suggests her client is guilty.

Full Disclosure is Beverley McLachlin’s first novel after seventeen years as the Chief Justice of the Supreme Court of Canada, the first women to hold that position and the longest-serving Chief Justice in Canadian history.

As a jurist, McLachlin is formidable, as an author she’s just a beginner, and it shows.

There are a number of plot points in the book that stretched this reader’s suspension of disbelief nearly to the breaking point, but I hung in there expecting some insights regarding the Canadian legal system, the professionals involved and those they prosecute or defend.

There weren’t any. In fact, the lack of originality had me wondering if I hadn’t read this before. That isn’t to say I didn’t enjoy it. The story takes place in Vancouver, Canada, my hometown and hers, and it was fun recognizing the restaurants, landmarks and neighbourhoods where the scenes unfold.

Unfortunately, as the novel draws to an end, and with many questions still unanswered, the author (out of desperation?) resorts to the old, tired technique of having her protagonist goad a suspect, Perry Mason style, into confessing. Of course, this confession is taped on a recorder hidden in her pocket and is used to exonerate her client. See what I mean about lack of originality.

Though it didn't have any real bearing on the novel, I was surprised and disappointed at the author’s treatment of a First Nation person in her story. Though a very minor character, when this young woman is challenged by isolation and unhappiness her choice is to become a drug addict and support her habit by prostitution.

With so many other positive possibilities out there, why did someone of McLachlin’s stature and presumed sensibilities choose this clichéd depiction of our Indigenous people?

Despite the efforts of the best editors Simon and Schuster employ, I doubt Full Disclosure would have been published had it not been for the author’s significant profile which, like all books written by celebrities, assures at least some sales.

The real test will be McLachlin’s next novel - if there is one.