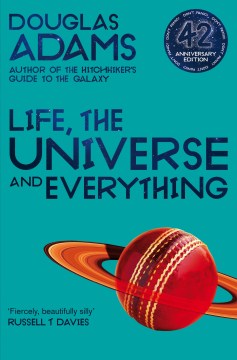 Life, the Universe and Everything

In Life, the Universe and Everything , the third title in Douglas Adams' blockbusting sci-fi comedy series, The Hitchhiker's Guide to the Galaxy, Arthur Dent finds himself enlisted to prevent a galactic war. This edition includes exclusive bonus material from the Douglas Adams archives, and an introduction by Simon Brett, producer of the original radio broadcast. Following a number of stunning catastrophes, which have involved him being alternately blown up and insulted in ever stranger regions of the Galaxy, Arthur Dent is surprised to find himself living in a cave on prehistoric Earth. However, just as he thinks that things cannot get possibly worse, they suddenly do. An eddy in the space-time continuum lands him, Ford Prefect, and their flying sofa in the middle of the cricket ground at Lord's, just two days before the world is due to be destroyed by the Vogons. Escaping the end of the world for a second time, Arthur, Ford, and their old friend Slartibartfast embark (reluctantly) on a mission to save the whole galaxy from fanatical robots. Not bad for a man in his dressing gown . . . Follow Arthur Dent's galactic (mis)adventures in the rest of the trilogy with five parts: So Long, and Thanks for All the Fish, and Mostly Harmless .
Publisher: 2009
ISBN: 9780330513142
Branch Call Number: OVERDRIVE
Characteristics: 1 online resource
Additional Contributors: Overdrive, Inc

Combine LOST WORLD with DOCTOR WHO and you have LIFE, THE UNIVERSE, AND EVERYTHING.
http://www.penhead.org/

“My doctor says that I have a malformed public-duty gland and a natural deficiency in moral fibre and that I am therefore excused from saving universes.”

“We can't win against obsession. They care, we don't. They win.”

“It is a mistake to think you can solve any major problems just with potatoes.”

In this, the third installation of the Hitchhiker's series, Arthur Dent is back on Earth, some two million years in the past. Not a pleasant place to be, but in no time he's joined by his buddy Ford Prefect and they're off time-traveling the universe together, explaining everything and concluding nothing. Typical Adams.

Gosh, are these books any more random!?!?! I love it! The audiobook version is even better!

The first half is very slow and boring, but towards the end you'll be glad you read through :D

This book, the third in the Hitchhiker’s Guide series, has a storyline even more random than the first two.

more Arthur dent and ford prefect adventures. humor, satire and philosophy by the master who died way too young.

Combine LOST WORLD with DOCTOR WHO and you have LIFE, THE UNIVERSE, AND EVERYTHING. Douglas Adams resurrects our favorite time-travelers in this, the third installation of the Hitchhiker's Guide to the Galaxy. While it's short on conclusions, explanations abound.

Continuing off the ending of The Restaurant at the End of the Universe, Arthur Dent and Ford Prefect are still stranded in time on pre-historic Earth. Luckily, Ford notices disturbances in the “space-time” wash and they are able to travel forward in time to a cricket game by catching a ride on a Chesterfield sofa. At the game, white robots suddenly appear and steal the Ashes (the burnt remains of a cricket stump). Slartibartfast is also at the cricket game and whisks Arthur and Ford away on his ship. He explains that the robots are from Krikkit and they need to be stopped from finding more pieces of the Wicket Gate lest they open the Slo-Time Envelope and cause the destruction of the Universe. Can Arthur and Ford save the Universe as they know it? What other crazy things will happen?

xzhang17 thinks this title is suitable for 12 years and over