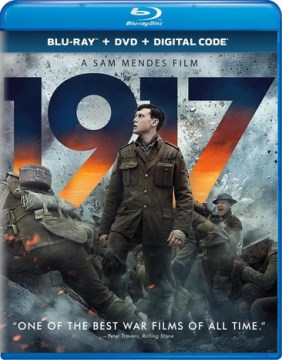 This is an absolutely superb movie! Never mind it is a WWI story but from the screenplay, the actors, acting, sets, film work - it had my husband and I engaged from the moment we started watching right up until the start of the credits. The only thing was that we found that we really regretted not seeing it on the big screen where many of its' effects would have been amplified. If I could, I would give it 10 stars...it is that excellent! Highly recommended!

THIS IS A LENGTHY 1hour 59minutes DVD movie, by Universal Pictures Home Entertainment.

I watched this movie in theaters cause my brother wanted to see this movie i do seee this a movie on dvd in the mall at Sunrise but i don't go to the mall that often as i use to cause of Covid 19 taste like old shit i heard in theathers on dvd like shose weaird i said it looks like hitler but its not my brother said and he said he was in Marry Poppins retruns i said really i watch that in theathers too when he said telephone lines the phone rings but noone was think when m,y brother picked it up we were watching it on DVD now any questions he said no i said no sir he said there was a lot of people in theathers watching this movie i don't know if people laughed at your steping on the dead we didn't eat popcorn we had bear paws snacks brownies to eat and to then he said Tuesday witch we watched it in theathers he said tuesday i said today is tuesday my brother said make sense i thought he snack his butt but it was his helmet i thought about this but i don't think i said it its a trick don't you see fire from pocahontas when we saw it case we saw flies around the horse i didn't notic there was a dead man on the wire hanging in theathers untill now on dvd was it rats then oh yeah oh skellations i said in theathers in theathers i didn't see a rat now on dvd i see a rat i didn't know there were dead bodys i thought they were just people i didn't notic a deadman in the wire untill now on dvd i thought he is just looking i said what is he looking at my brother said nothing it looks like a hand i didn't see it in theathers eather my brother says it is i didn't see a rat biting a sack in theaters untill now on dvd or even a wire i didn't see it in theaters untill now i heard skunk in theaters not Sco at home when they caught they caught i didn't notice the rat untill now on DVD i thought they were just saying rats i said rats i don't see no rats i think they laughed how he talked about a rat bitting a mans ear off and running off with it we laughed a little and he said in may they have to pick them i didn't notice it was a dead dog in theaters untill now my brother said to me when i saw a doll i said oh a doll i think i notic it in theaters when he saiddid you find any food no i said at home and he said no in theathers i thought they are going up to him i said to my brother are they gonna kill him he said nothing and no on dvd i think that too i didn't understand what he said then i heard him say get him some water Oh water I said then he tried to kill him I was surprised I didn't see anything Watching at home it reminds me of the Mary-Kate and Ashley movie "Our Lips Are Sealed" when he said I've been hit a guy said it in the movie I have it on VHS I thought it was money inside the wallet but it was a picture Oh a picture I said in theatres I said to my brother why is he taking his rings my brother said he's taking them to his brother I thought the other guy said Sir not him until I saw it on DVD I was surprised they said the F word they said the word fag but it's for smoking my brother said I didn't know until now on DVD I heard white gold not right go they laughed when he told them a story about a man wiping his hand on another man's coat covering it with shit but I didn't because I didn't get it not even my brother I didn't hear piss off in theatres I didn't see in theatres he did a V sign until I saw it on DVD In theatres it scared me when I heard a gunshot while he was crossing the bridge at home it didn't scare me the music makes it look like he's getting out of bed like a baby from a cradle such sweet music and he asked a girl yes she said I said oh she has a baby and he asked who is her mother she doesn't know and he said he has food and the baby has her hands out and she say her baby needs milk I said he doesn't have any milk oh he does when he took it out and he gave it to her and she asked does he have children and he said nothing I said what is he doing is he puking in theatres my brother said yes

2019 Academy Award Nominee, for Best Picture, and won 3 Oscars, including Best Cinematography, which was highly deserved. ThIs excellent film is mostly action and it’s incredibly intense. Watch this then watch They Shall Not Grow Old.

Roger Deakins deserved his Oscar for best cinematography. The camera work, special effects, and especially the lighting are all top notch. The editing of the film gives us a narrative presented very nearly as a single take, however that strength is in a way also the film's weakest point, turning it into the equivalent of a first person shooter video game. Each sequence is nothing more than a setup for the next scene, where the protagonists win points for conquering an obstacle and then move on to the next challenge. There is no intellectual engagement, no character development, no worthwhile dialogue, no historical accuracy. Mendes seems less interested in the honest presentation of the actual horrors of war than he does in visual spectacle and emotional manipulation. Billing this movie as "one of the best war films of all time" is a lot like Trump billing himself as "a very stable genius". And as a final insult, the special features at the end of the DVD are so saccharinely self-congratulatory, they should only be viewed after taking a large dose of antiemetic medication.

1917 during the Great War. two British soldiers are sent through war-active theater with a message that will prevent the loss of 1600 troops. The audience may not realize that the movie is supposed to appear as one continuous shot as the two soldiers travel through a continuous string of deadly active war areas to achieve the success of the message's deliverance. Beautiful cinematography. One of the best films of the year.

Visually it is very impressive, and well-acted, but military historians might take issue with the command decisions portrayed in this movie and question if the episode would have ever happened at all. In spite of this, it is still a good film and worth watching.

(Schofield sang to a baby girl to the poem The Jumblies By Edward Lear; sieve is a boat that floats called the coracle)

As a parting gift, the enemy cut all our telephone lines. Your orders are to get to the 2nd at Croisilles Wood, one mile southeast of the town of Écoust. Deliver this to Colonel Mackenzie.
...
Leave immediately. Take this trench west up on Sauchiehall Street, then northwest on Paradise Alley at the front. Continue along the front line
until you find the Yorks. Give this note to Major Stevenson. He's holding the line at the shortest span of no-man's-land. You'll cross there.
-It'll be daylight, sir. They'll see us.
There's no need to be concerned. You should meet no resistance.
-Sir, is... is it just us?
"Down to Gehenna or up to the Throne, He travels the fastest who travels alone."

Erinmore's never seen no-man's-land. We won't make it ten yards.
===
I-I didn't know what I was picking you for. I thought they were going to
send us back up the line or for food or something. I thought it was going to be something easy.
===
I hoped today might be a good day. Hope is a dangerous thing. That's it for now, and then next week, command will send a different message. "Attack at dawn." There is only one way this war ends. Last man standing.
===
If I may, I'd like to write to your mother. Tell her that Tom wasn't alone.
-Of course.
He was... He was a good man. Always telling funny stories.

"They're walking into a trap. Your orders are to deliver a message calling off tomorrow morning's attack. If you fail, it will be a massacre."

"I hoped today would be a good day. Hope is a dangerous thing."

UnilaK_26 thinks this title is suitable for 13 years and over

humbleworm thinks this title is suitable for 12 years and over

I didn't notice there were dead bodies I said in theatres and now on DVD I didn't notice them either. In theatres I thought he was crying because someone died but my brother said it's because he's exhausted. 7, 13 I heard at home but he said seven platoon. My brother later said that the actor who played Colonel Mackenzie was the voice of the Grinch in the 2018 film. He said that during the credits. We watched The Grinch in theatres too. I said in theatres I forgot that he had the rings when he gave it to the other man.