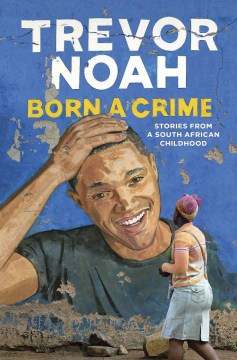 Born A Crime Stories From A South African Childhood By Noah, Trevor Book - 2016
3 - View All Summaries

Trevor Noah is best known as the late night talk show host who took over the Daily Show after the retirement of Jon Stewart in 2015. Trevor Noah is South African and this book relates the many fascinating and improbable stories that made up his childhood.

Noah reminds us of the horrors of apartheid (forced segregation of the races) in his native country. The fact that his mother is black and his father is white was actually a crime when he was born in the 1980s. People of different races could not marry and definitely could not have a child together. But that's exactly what happened in Trevor's case.

By the bizarre and hateful traditions of South Africa at that time he was labelled as 'coloured' to differentiate him from black people and white people. Everyone was classified based on their race. He was kept out of the public eye as much as possible growing up. When seen in public, Trevor's mother had to pretend she did not know him. As a child Trevor found this profoundly disturbing. His white father from Switzerland also could not acknowledge any connection with the boy.

Despite the horrors of life in South Africa, this memoir is upbeat and very funny. Trevor Noah was the kind of child that drives parents crazy. He was impulsive, clever and always getting himself into trouble. He was maddening and yet he was also adorable and irresistible.

There is no bitterness in his retelling of his childhood despite the poverty and violence that was always around him. He relates how difficult it was to fit in because of his unusual racial status. Noah's honesty is refreshing. At no time in his book does he exaggerate his importance or avoid embarrassing stories about himself. Quite the opposite, in fact. His stories about his first girlfriend, his illegal money making schemes and his trouble fitting in with other kids are honest, endearing and often hilarious.

It is incredible to think that a young man who grew up under such horrible circumstances could turn out to be the successful host of a TV show half a world away.