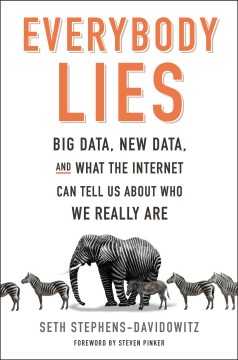 Everybody Lies Big Data, New Data, and What the Internet Can Tell Us About Who We Really Are By Stephens-Davidowitz, Seth eBook - 2017
21 - View All Comments

This book was OK, but not great. The basic premise is that people do not answer surveys honestly; they answer in a way that makes themselves look good. Also, traditional surveys have relatively small samples.

On the other hand, if you can analyze millions of Google searches, you can get loads more data, and people are apparently more honest in their Google searches than they are in surveys.

I have to say that my reaction to that was “Don’t Google anything you would not want on the front page of the Seattle Times (or your newspaper of choice)!” This author was looking at aggregate anonymous data, but clearly Google knows what you have Googled as an individual. Talk about scary!

There were some interesting tidbits. For example, the author notes (in hindsight, of course) that the big data of Google searches showed that the current president was likely to win in 2016, even if people were unwilling to admit they would vote for him when surveyed. Also, people claim they plan to vote, but they don’t Google things like “how to vote” and “where to vote”, which demonstrates they were just trying to look good to the person taking the survey.

People say on Facebook that they like the Atlantic more than the National Enquirer. Their Google searches and clicks indicate otherwise. Whatever your Facebook friends are saying on Facebook is probably untrue, as people are trying to make themselves look more impressive to others. (If you did not already know that, you are gullible.)

I was underwhelmed by this book. It might make an interesting magazine article, but it does not have enough substance for a book.