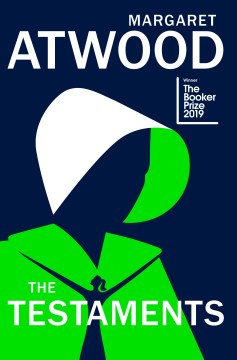 In spite of my admiration for Atwood’s writing and her thinking, I could not get to like The Testaments. If I’m being generous, I place it in a category of political satires like those of Jonathon Swift – the interest is in the ideas, but less so in the story line or the characters, who are cartoon caricatures instead of anything like real people.
This is disappointing in Atwood, because the characters in her other novels have depth and realistic emotions. Offred in The Handmaid’s Tale was not cartoonish, but invited readers to share in her emotions at the horror of her life. None of the three leads in The Testaments, to say nothing of the minor characters, invite empathy because they feel like sketches that an author might develop while working out the plot for a TV treatment that is not likely to be made. Was Atwood rushed into completing the book before she had time to go back and make the characters real? It feels like it.
This is not to say there is nothing to admire in the book. Atwood’s aphorisms about social life are thoughtful and provocative, and her caustic quips about the hypocrisy and corruption of Gilead are entertaining. Lydia, the senior aunt, ruminates in Atwood’s sharp, ironic, critical voice and that is worth the time. Some incidents, like the abuse of the girls in Gilead, create a sense of what life could be like for powerless young women in our own society. Lydia’s compromises, initially to save her life and later to protect her power in Gilead, illustrate some aspects of how a vicious and violent culture distorts the life and values of its victims. Even the small ways that the powerless girls find to gain some agency and self-protection are a thoughtful illustration of how people survive in our own culture. Generally, though, neither the young girls nor Lydia were convincing as characters from the start through to the end of the novel.
Atwood also makes good points about media and propaganda, literature misrepresented for the users’ own ends. But she also shows that literature is also a defense, allowing readers to discover the truth and manipulation. This is a theme in Atwood’s other writing, and it’s particularly relevant in the Trumpian political period.
However, so many details of the novel just feel wrong – that is to say, they don’t match the pictures I have from other, better writing. The spy story aspects, for example, are superficial and unrealistic compared to anything by John Le Carré. (Really? Sending an untrained child into a police state as an agent and expecting that she will extricate herself?) The capture and torture of the women in the initial revolution is unrealistic compared to what really happened in recent Latin American revolutions, for example, or even to the portrayal in The Handmaid’s Tale. I’m sure that Atwood knows better than this, as she reads widely and comments on these very topics in her political work.
What’s most disappointing to me, however, is the thinness of the ideas she presents here. Aside from shallowly exploring how a senior apparatchik rationalizes her participation, there’s little here that is not presented better in The Handmaid’s Tale, or in a large number of other novels about political dissidence.
In the acknowledgements, Atwood calls this a thought experiment, and that's probably the best way to think of it. It follows the threads of the earlier story in some new ways, but it's not a fully developed exercise (in spite of the many people who seem to have contributed, and the 400 pages). Clearly, many people react viscerally to its depiction of violent patriarchy, but this is a book that should and could have been much better.